Office of the President / Biography & CV Dr. Tuajuanda Jordan has served as St. Mary’s College of Maryland’s (SMCM) seventh president since July 2014. The College, as Maryland’s only public honors college and the first of its kind in the nation, has been widely recognized for its successes. Consistently ranked among the top 100 Kiplinger’s list of best values in public colleges and among the top 10 best public liberal arts colleges in the nation by U.S. News & World Report, SMCM continues to build upon its solid reputation for academic excellence under Dr. Jordan’s watch. Under her leadership, the College continues to analyze and assess its programming to ensure that students are both striving and provided opportunities to be engaged, productive global citizens and leaders.

Since joining the College, President Jordan has been widely recognized for her contributions to higher education and the larger community. Recently, she was named one of the Top 25 Women in Higher Education by the national magazine, Diverse Issues in Higher Education. In addition to serving on numerous national panels and boards, she was recognized as a Fellow of the American Association for the Advancement of Science (2018), Black Leader in Education by the AFRO (2017), was named as one of Fisk University’s Talented Tenth (2016), Purdue University’s Distinguished Women Scholars (2015-16), and as an Influential Marylander by the Daily Record (2015). She received the Torchbearer Award (2014) from the National Coalition of Black Women, Baltimore Metropolitan Chapter, was inducted (2015) into the Zeta Chapter of Phi Beta Kappa, the nation’s oldest academic honor society, was awarded the Education Excellence award by the Southern Maryland Minority Chamber of Commerce (2018), and received the inaugural CEO’s Excellence Award from the Prince George’s County Public Schools Foundation (2019).

Dr. Jordan gained national prominence in the realm of science education with the creation of the Howard Hughes Medical Institute’s Science Education Alliance (SEA) program and the launch of its first initiative, the SEA Phage program, which engaged novice undergraduates in research in genomics and bioinformatics. This program has been implemented at more than 50 diverse institutions across the nation, impacted thousands of students and faculty, and resulted in numerous scientific and pedagogical publications.

Prior to St. Mary’s College, Dr. Jordan was a tenured faculty member and administrator at Xavier University of Louisiana and Lewis and Clark College in Oregon. Dr. Jordan holds a B.S. in chemistry from Fisk University and a Ph.D. in biochemistry from Purdue University. 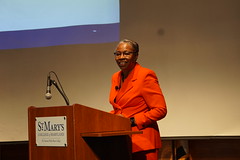