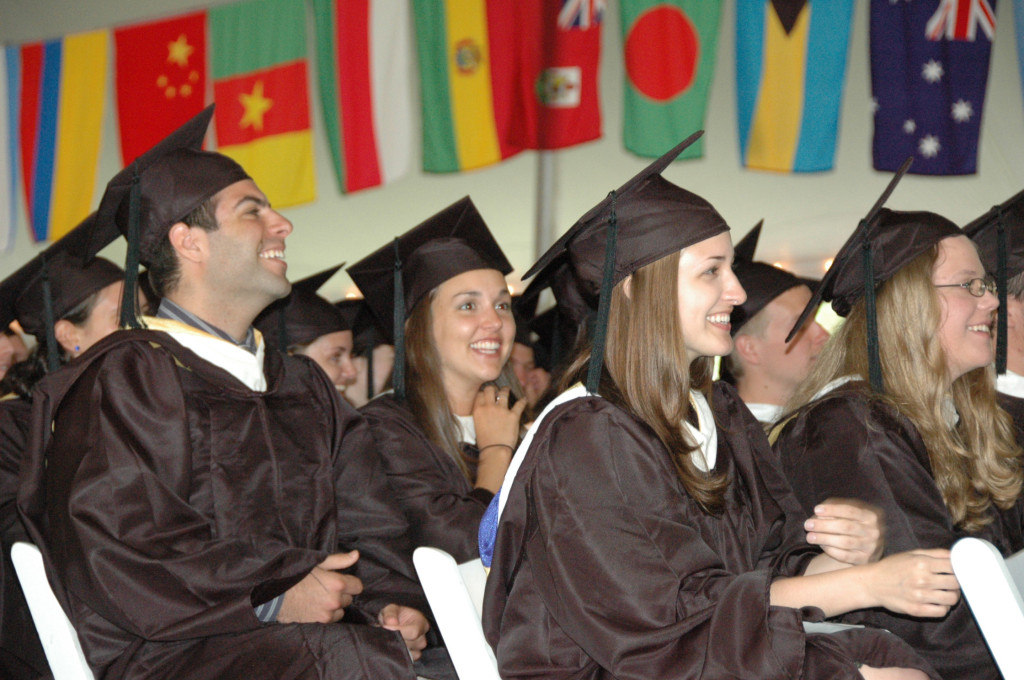 Today, St. Mary’s College of Maryland graduated one of its largest senior classes of 466 students on the campus Townhouse Green. To emphasize the college’s reputation for volunteerism and to acknowledge the 50th anniversary of the Peace Corps, the Commencement speaker was Peace Corps Deputy Director Carrie Hessler-Radelet.  Also, honorary degrees were awarded posthumously to Sargent Shriver, the first Peace Corps director, accepted by Joe Kennedy III, Shriver’s great nephew, and to the current director, Aaron Williams.

The agency has more than 8,600 volunteers helping in developing countries around the world right now. Eighteen of them are St. Mary’s alumni, putting the college once again into the Top Ten ranking of small colleges with graduates volunteering. The Corps is just one option the college provides to develop students as international stewards.

As college President Joseph Urgo told the seniors in his Commencement charge:  “Help your communities, your coworkers, and complete strangers to create a world that is more just, more inclusive, and saner.”

“You’ve spent time in and around this river, our small waterway that leads to expansive vistas,” Urgo continued. “And now you are about to enter those vaster seas (to continue the metaphor): oceanic experiences await you. To this day, oysters have been your world: and now…well, to quote Shakespeare, and now ‘the world is your oyster.’”

To emphasize the “vaster seas” and opportunities awaiting students, Hessler-Radelet, who has been with the Peace Corps much of her life, listed three lessons she has learned: “We grow by challenging ourselves, by stepping out of our comfort zones,” she told the students. “Relationships are the most important thing in life, whether we are talking about family or diplomacy or business.” And finally, “Service is not just about a moment. Service is a mindset. You don’t have to go halfway around the world to make a difference in someone’s life. Whatever field you choose, whatever line of work, you can find ways to help others.”

Hessler-Radelet and her husband served together as Peace Corps volunteers in Western Samoa from 1981 to 1983. In fact, four generations of her family have served as volunteers, including her aunt, her grandmother, and her nephew.

Board of Trustees Chair Molly Mahoney Matthews took a moment during the ceremony to remember Maryland governor and trustee emeritus William Donald Schaefer for his legacy to the college as well as other campuses in Maryland. “He will always be remembered for his contributions to education and in particular to the education we provide at St. Mary’s,” she said.

The valedictorian was Allison Marie Conner, of Frederick, Maryland, who majored in anthropology and history. She is a member of Phi Beta Kappa, Lambda Alpha, and Phi Alpha Theta honor societies, is a St. Mary’s Senior Scholar, a Sullivan Scholar, and is on the Dean’s List. Conner will be attend­ing graduate school at the University of Massachusetts (Boston) for a degree in archaeology.

This year, for the first time, seniors chose a “quintessential student” to represent the class and also speak at graduation. He was Ian Simpson-Shelton, of Upper Marlboro, Maryland, and is a biochemistry major.

St. Mary’s College of Maryland, designated the Maryland state honors college in 1992, is ranked one of the best public liberal arts schools in the nation by U.S. News & World Report. More than 2,000 students attend the college, nestled on the St. Mary’s River in Southern Maryland.