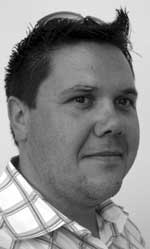 Leon Wiebers, assistant professor of scenography at St. Mary’s College of Maryland, has been awarded a Fulbright research grant for the 2012-13 academic year in Seoul, South Korea, hosted by the Seoul Institute for the Arts (Seoul Arts).  The Fulbright Program is sponsored by the U.S. Department of State and is designed to promote understanding between the people of the United States and the people of other countries.

His research project, Traditional and Modern Modes in Dress for Performance, will examine, through collaborative endeavors with the artists at Seoul Arts, how traditional Korean dress and modern design meld to create new modes in live performances; integrating the arts between East and West, traditional and modern and across genres.

“Being in Seoul provides opportunities to work with and see professional theatre offerings in traditional Korean dance and other historic performance styles,” says Wiebers. “ I will examine the construction and evolution of Korean dress through the collections held at the National Museum of Korea, the Museum of Korean Embroidery, and the Suk Joo-sun Memorial Museum of Korean Folk Arts, to name a few.  Additionally, I will travel to other parts of Korea to examine regional differences in performance, culture and dress.  Seoul Arts will provide an excellent home to which I can return and experiment with my findings and research in a performance milieu.  With the support of Seoul Arts, I will be able to deeply examine these ideas and put them into practice.”

Before he leaves for South Korea, Wiebers will design the costumes for a new production of “The Music Man” for the Glimmerglass Festival’s 2012 summer season in Cooperstown, N.Y. Wiebers, who has designed costumes for English National and San Francisco operas, will work with Tony-nominated director Marcia Milgrom Dodge.