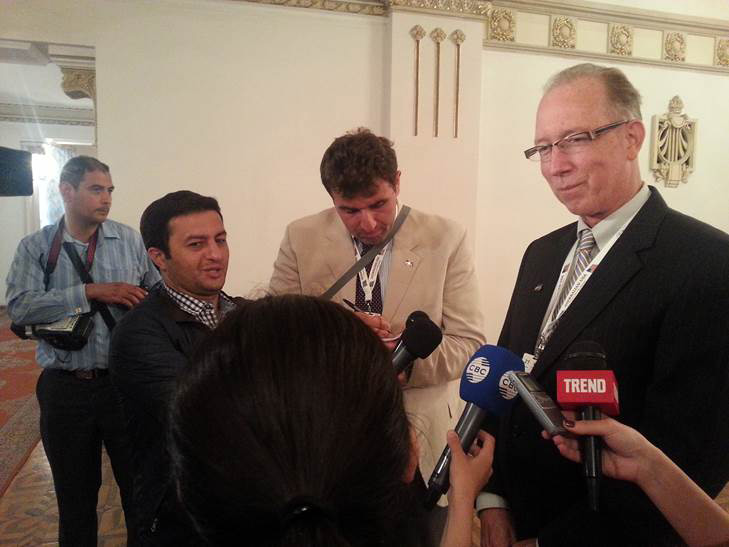 As part of research and international outreach efforts, Dr. Michael Cain, St. Mary’s College of Maryland professor of political science and director of the Center for the Study of Democracy, recently concluded two trips to the Middle East and Caspian Region, returning from Turkey just after protests erupted in Istanbul.

Cain said, “These trips are important not only to learn more about the region, but also to share our perspectives and knowledge about democratic processes in the U.S.  Wherever I go in the world, policymakers, students and government officials want to hear about our system and how it functions as well as our perspectives on their countries.”  Dr. Cain has traveled to nearly 20 countries since joining the faculty at St. Mary’s College, frequently working in Europe and Eurasia.

In April, Dr. Cain moderated discussions on constitutional change at four universities in Turkey (Bilkent, Bahcesehir, Gediz) as part of an invited panel sponsored by the Former Members of Congress Association and the Turkish American Association. The delegation included four former members of Congress: Ben Chandler (Dem., Ky.), Lincoln Davis (Dem., Tenn.), Martin Lancaster (Dem., NC), and Jim Kolbe (Rep., NM).  As part of this trip, the delegation was briefed by the U.S. Ambassador to Turkey, Mr. Frances Ricciardone, and former Turkish Ambassador to the U.S., Mr. Ugur Ziyal.  They also met with members of the Turkish Parliament and ruling (Justice and Development Party) and opposition (Republican People’s Party) party members.  The purpose of the trip was to discuss Turkish politics and compare the U.S. political system with recent Turkish proposals to change their constitutional process. Turkey is a member of NATO and it has recently experienced several free and fair elections.

In May, Dr. Cain delivered an energy report during the U.S.-Azerbaijan Conference held in Baku, Azerbaijan.  He was an invited speaker on panel entitled “Energy Security from the Caspian to Europe: the Changing World Energy Security Dynamics.”  The panel included former U.S. Ambassador to Azerbaijan, Mr. Matt Bryza and Vice-President of the State Oil Company of Azerbaijan Mr. Elshad Nasirov.  Dr. Cain has followed energy issues for over 10 years in Europe and Eurasia and recently co-authored a report on new energy policies in the Caspian Region.