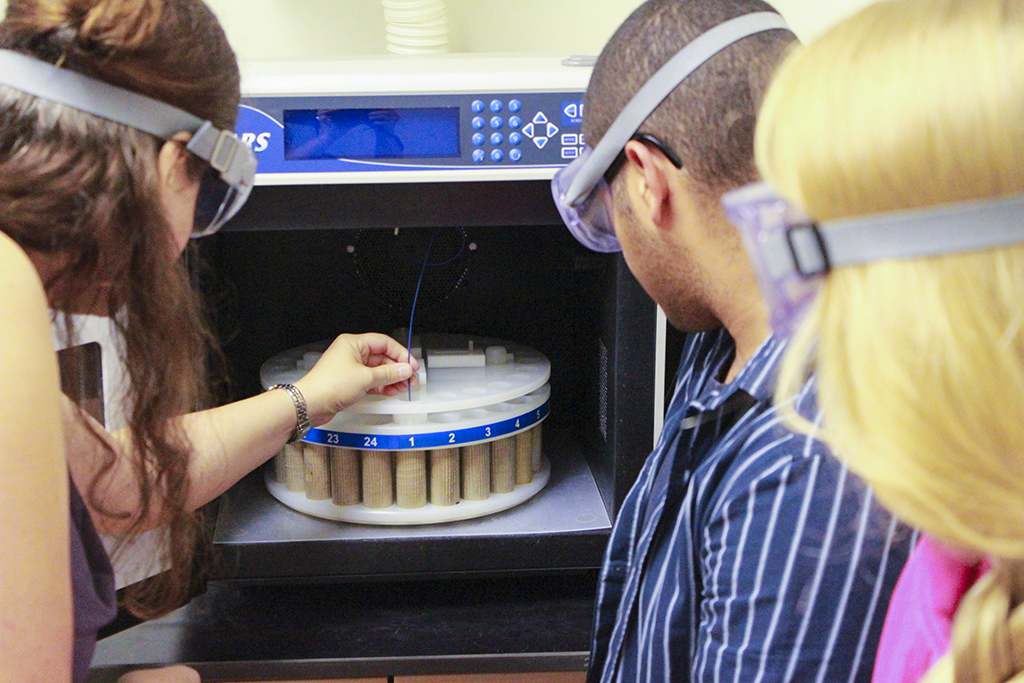 When you think of organic chemistry, what comes to mind? Perhaps structures, properties and reactions? For St. Mary’s College of Maryland Assistant Professor Leah Eller, microwaves can also be thrown into that mix. Eller’s colleagues Shaun Murphree of Allegheny College in Pennsylvania, and Jun Shin of Queensborough Community College in New York agree that microwaves in organic-chemistry labs are a good idea.

With this common interest, in January 2013, the three educators applied for the National Science Foundation’s highly competitive Transforming Undergraduate Education in STEM (TUES) Program grant. Out of 373 proposals submitted, approximately 30 proposals were funded. Confirmation came this past September that the project proposal submitted by Eller and her colleagues was one of those 30.

Collectively, St. Mary’s, Allegheny, and Queensborough received $600,000 to conduct the second phase of developing a new organic-laboratory curriculum using microwave technology. Phase one of the project, also funded by a TUES grant, began with Murphree at Allegheny.

Microwaves, as opposed to conventional heating techniques, such as heating a reaction on a hotplate, reduce the time it takes for organic reactions—one of the most time-consuming steps in the experimental process—from hours to mere minutes. Thus, with the time saved, a single laboratory period can be used for experimental design and analysis, debriefing and troubleshooting as well as optimization.

The main goal, says Eller, is to get the students to think about their experiments in a way that they have not had time to do before now.

“It’s not just about cutting back on time, it’s what we’re doing with that extra time,” she said. “Students will have the opportunity to gain conceptual knowledge instead of just running the experiment and saying, ‘yes, it worked,’ or ‘no, it didn’t work.’”

Murphree says that during phase one of the project, the extra time proved to have a positive impact on Allegheny’s chemistry students. “We tested how modifying lab time with the use of microwaves would affect students’ attitudes toward science, and we saw positive outcomes,” he said. “In phase two, working with St. Mary’s College and Queensborough Community College, we will see those gains more clearly.”

Beyond time saving, the use of microwaves in organic-chemistry labs has another benefit: it is a green alternative. With microwaves, experimentalists can run a reaction using less toxic solvents such as ethanol or water.

The notion and use of microwaves in labs is not a new concept. In the mid-to-late 80s, scientific articles began to emerge on the topic. Soon after, microwaves found their ways to classroom science labs, though, without much curricular structure. And, unlike those used in the past, today’s laboratory microwaves have more automation features, are less costly, and safer.

Eller, Murphree, and Shin are developing a comprehensive, student-centered curriculum. The curriculum, based around the use of today’s modern microwaves, will feature lab modules with easy-to-adopt student and instructor materials. The curriculum will go through a three-year trial at each of the three institutions, and will be evaluated by two laboratory-curriculum consultants before being made available to other colleges and universities.

Out of the $600,000 TUES grant, St. Mary’s College will receive $170,000. The funds will support summer-student researchers, equipment and supplies, curriculum evaluation, and workshops to help disseminate findings.