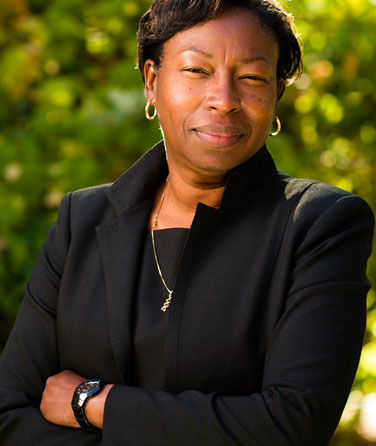 By unanimous vote of the Board of Trustees, Dr. Tuajuanda Jordan has been appointed president of St. Mary’s College of Maryland. Jordan’s appointment came following an extensive four-month search. The 11-member search committee—comprised of trustees, faculty members, a student and a member of the staff—evaluated applicants to identify the three finalists the board considered.

Jordan, currently serving as dean of the College of Arts and Sciences and professor of chemistry at Lewis & Clark College in Portland, Ore., will take office on July 1.

“On behalf of the Board of Trustees, I am thrilled to welcome Dr. Jordan as the next president of St. Mary’s College,” said Gail Harmon, chair of the Board of Trustees and Presidential Search Committee. “A pool of well-qualified candidates sought the position, and from that pool we have chosen a superlative new leader. Her background includes substantial accomplishments and scholarship in the sciences as well as the development of innovative science education programs. Dr. Jordan will bring added creativity and rigor to the programs of St. Mary’s College.”

Dr. Ian Newbould, interim president of St. Mary’s College, said, “I applaud the appointment of Dr. Jordan. A distinguished scientist and academic leader with a national reputation, she will advance our cause immeasurably. St. Mary’s is fortunate to have attracted her.”

“St. Mary’s College is an institution where individuals have a strong sense of their history, an understanding of their mission, and an eye toward the future,” said Jordan. “It is an institution where committed leadership, creativity, innovation, collaboration, and integrity are expected of and appreciated by everyone in the community. St. Mary’s is at a unique point, filled with achievement and vast opportunities for continued growth, and I am honored to have been chosen to lead this distinguished institution.”

Prior to her position with Lewis & Clark, Jordan served as director of the Science Education Alliance (SEA) of the Howard Hughes Medical Institute in Chevy Chase, Md. As director, Jordan led a collaborative effort designed to have scientists and educators work together to enhance science literacy while preparing the next generation of scientists. She also headlined the National Genomics Research Initiative in 2008, a program that exposes first-year college students to hands-on genomics research. Jordan entered academic administration in 2002, serving as associate dean of the College of Arts and Sciences at Xavier University of Louisiana, where she soon advanced to associate vice president for academic affairs.

Jordan received a B.S. in chemistry from Fisk University in 1982 and a Ph.D. in biochemistry from Purdue University in 1989. She was an undergraduate scholar and a graduate fellow of the National Institutes of Health Minority Access to Research Careers (MARC) program. She conducted her postdoctoral training at the University of Cincinnati School of Medicine. Jordan was a tenured faculty member in the department of chemistry at Xavier University of Louisiana and a visiting scientist at the University of Michigan in biophysics. Her honors include being named a Purdue University Distinguished Alumni from the School of Agriculture in 2008, and, in 2009, being named a “revolutionary mind” by Seed magazine.

Jordan, 53, is from Forestville, Md., and married to Eric Heatley. Jordan has two grown children, Jordan Starck and Patrice Starck Darby, both 23.

St. Mary’s College is one of only two public honors colleges in the nation. Dedicated to providing an affordable liberal arts education for a diverse student body, the college has the highest four-year graduation rate of any public college or university in the state. Within five years of graduation, 70% of its alumni pursue a graduate and/or professional degree. St. Mary’s College also boasts a 90% first-to-second year retention rate based on the fall 2012 class.