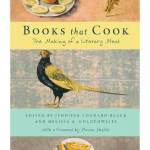 Professor of English Jennifer Cognard-Black has had her anthology, “Books that Cook: The Making of a Literary Meal,” published by NYUPress. She is co-editor with Melissa Goldthwaite, professor of English at Saint Joseph’s University. Featured in the anthology are poems by St. Mary’s College Associate Professor of English Karen Anderson and Professor Emeritus Michael Glaser. On the cover is a painting by Professor Sue Johnson. The anthology will be released on Amazon.com in August and will be generally released this September.