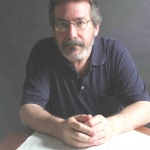 On June 16 in Columbia University’s Miller Theater, Professor of Music David Froom’s composition “Amichai Songs,” was performed by the Orchestra of the League of Composers under direction of Louis Karchin. “Amichai Songs” sets to music three translated poems by Israeli poet Yehuda Amichai. The New York Times review of the piece remarked that Froom’s composition “captured the condensed and emotionally charged nature of their [Israeli] language.” In March, Froom earned a Maryland State Arts Council Award for music composition, his fifth such award. His successful season also included the publication of four new pieces of music and performances in venues such the Smithsonian Institution and in Italy. “This New York City performance takes the cake,” Froom said. “It was both a high profile venue and an orchestral performance by one of the nation’s leading new music organizations.”