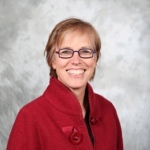 Professor of Religious Studies Katharina von Kellenbach was noted for her Holocaust research in East Berlin in an article regarding the first woman rabbi, Regina Jonas. During von Kellenbach’s research, supported by College faculty development funds, she discovered the only known existing photo of Regina Jonas. Additionally, von Kellenbach was described as a “widely respected scholar of the Holocaust, Christian-Jewish relations and feminism.”