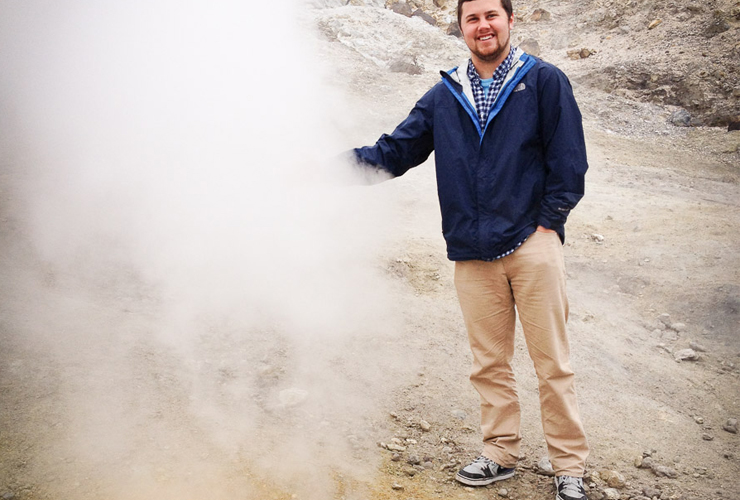 Immortalized by its devastating past and for its treasure trove of well-preserved history, Pompeii is the place to go if you want to be transported back to the height of the Roman Empire. St. Mary’s College of Maryland student Bobby Condrey ’17 had the chance to experience first-hand the ancient treasures that give Pompeii its reputation. He was one of the first St. Mary’s College students to take advantage of one of the college’s four new Italian programs.

Through partnership with Arcadia University, St. Mary’s College students can now study in Rome, Perugia, Florence and Sicily, where they can become immersed in Italian culture as well as participate in food studies or community-based projects.

As part of a Roman Civilization class, Condrey participated in an overnight excursion to Pompeii, as well as to the nearby cities of Herculaneum and Oplontis. Each of these cities was completely destroyed and preserved by the eruption of Mount Vesuvius in 79 CE. The Roman Civilization class combines the studies of history, art, and architecture, thus providing a more holistic view of the past. Excursions such as these take advantage of the cultural and historical richness of Italy, providing students with hands-on experiences outside of the classroom.

“I took this class because I love the history before the medieval ages. We visited ancient Roman cities that were preserved by the volcanic rock formed from the eruption of Vesuvius. Herculaneum was very fascinating as the extravagance the wealthier class lived in is incredible,” said Condrey.

Pompeii is accessible from Perugia by train, which makes the perfect location for a weekend field trip.

For more information about St. Mary’s College’s new Italian programs, contact the Office of International Education at (240) 895-4202 or at ie@smcm.edu.