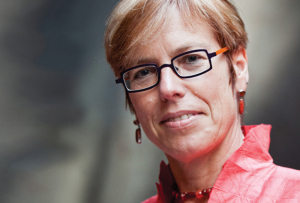 Katharina von Kellenbach, professor of religious studies, is the recipient of St. Mary’s College of Maryland’s Norton T. Dodge Award for Scholarly and Creative Achievement. She was honored during the college’s 2015 Awards Convocation held April 24.

A native of West Germany, von Kellenbach studied Evangelical Theology in Berlin and Göttingen (1979-1982) and received her Ph.D. in 1990 at Temple University. She became active in Jewish-Christian dialogue and Holocaust Studies while studying in Philadelphia and completed her dissertation on Anti- Judaism in Feminist Religious Writings (Scholars Press, 1994).

Her areas of expertise include feminist theology and Jewish-Christian relations; the ordination, life and work of the first female Rabbi Regina Jonas of Berlin (1902-1944), who was murdered in Auschwitz, as well as the theological, ethical, personal and political issues raised by the Holocaust. She is the author of several books, including her most recent two: “The Paradox of Freedom: Mary, the Manhattan Declaration and Women’s Submission to Childbearing” (Neukirchen-Vluyn: Neikirchener Verlag, 2015) and “The Mark of Cain: Guilt and Denial in the Lives of Nazi Perpetrators” (Oxford University Press, 2013).

The Norton T. Dodge Award for Scholarly and Creative Achievement was established in 1989 by the late Norton T. Dodge, who served on the Board of Trustees of St. Mary’s College from 1968 to 1980 and was professor of economics at the college from 1980 to 1989. The award recognizes excellence in scholarly publications, research and creative achievements in the arts.