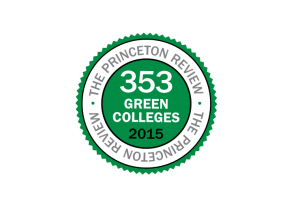 The Princeton Review chose the schools featured in its “green guide” based on data from the company’s 2014 survey of hundreds of four-year colleges concerning the schools’ commitments to the environment and sustainability. More than 25 data points were weighted in the assessment. Schools with green rating scores of 83 or higher made it into this guide. Most of the schools (347) in this edition are in the U.S. Five are in Canada. One is in Egypt.

“We strongly recommend St. Mary’s College of Maryland and the other fine colleges in this guide to the many environmentally-minded students who seek to study and live at green colleges,” said Rob Franek, senior vice president and publisher, The Princeton Review.

Franek noted his company’s recent survey findings indicating significant interest among college-bound students in attending green colleges. “Among nearly 10,000 teens who participated in our 2015 College Hopes & Worries Survey, 61% told us that having information about a school’s commitment to the environment would influence their decision to apply to or attend the college,” he said.