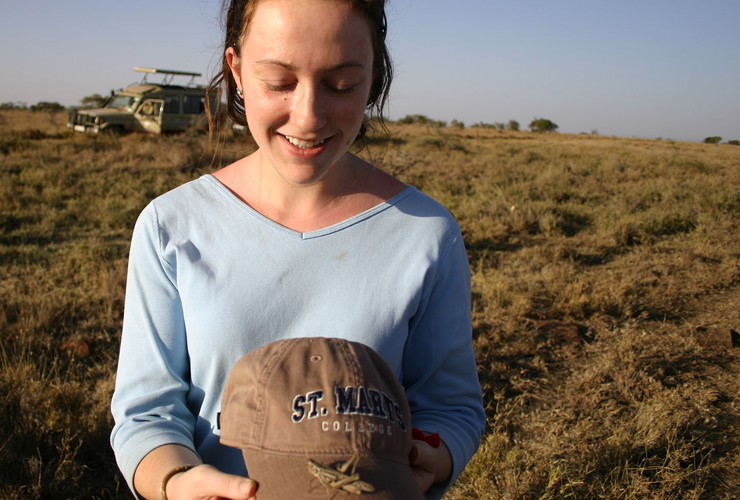 Student Anna Passaniti in The Gambia

Many St. Mary’s College students return from studying abroad with a passion to serve the needs they encountered during their stay. In honor of World Health Day (April 7), we are highlighting the efforts of students who are contributing to improving conditions related to health in The Gambia, the West African country they’ve become familiar with through the PEACE educational and cultural exchange program here at St. Mary’s, and the efforts of one student who is leading health research in the Turkana region of Kenya.

While studying abroad in the summer 2014, Gabriela volunteered at the Bakau Newtown Lower Basic School, where she became aware of a financial need to rebuild toilet facilities destroyed by heavy rains. Upon her return to the states, Gabriela reached out to the St. Mary’s College Gambian Culture Club, led by Eliza Fletcher ’15, in order to raise the funds. Their successful fundraiser brought in nearly $600 that has been sent to the school headmistress and was warmly received.

Rylinn shared her experiences in the intercultural exchange PEACE program at her church. Through sharing her story, she received generous contributions for basic surgical and medical supplies for the surgery theatre at Edward Francis Small Teaching Hospital in Banjul.

Ashley, a Desousa-Brent Scholar, studied in The Gambia summer 2014 through a Gilman Grant. Upon her return to the states, she raised funds for the Labor and Delivery Ward at Edward Francis Small Teaching Hospital. While interning at the ward, Ashley noticed a need for newborn receiving blankets, as she witnessed parents bringing their own blankets to the hospital or risk the chance of their babies catching pneumonia or a cold. The funds will purchase newborn receiving blankets and like materials to be given to mothers in need.

Anna spent six and half months in The Gambia last year studying anthropology. She left the country with a desire to explore further subfields including medical anthropology. This spring semester, Anna is studying at the renowned Turkana Basin Institute Field School in Kenya. Anna is conducting an independent research project on the epidemiology of trachoma prevention in Turkana. Trachoma, an infectious disease affecting the eyes, is one of the world’s leading causes of preventable blindness. The disease is prevalent in developing areas such as Turkana, where the land is arid and water sources are scarce. Through her research, Anna has been gaining an understanding of the existing local perspectives on the awareness of trachoma, and its treatment and prevention. Anna says that Trachoma prevention has not yet been studied in the Turkana region, thus she is sharing her research with local health clinics.