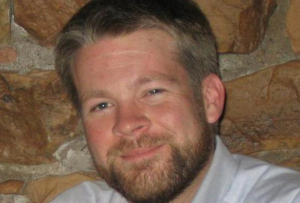 Barrett Emerick, assistant professor of philosophy at St. Mary’s College of Maryland, has been named to a list of “40 Under 40: Professors Who Inspire.”

The list, which profiles 40 inspirational professors under the age of 40 from select colleges and universities, is featured on the NerdScholar section of NerdWallet.com, a consumer finance website. The professors were chosen based on their ability to captivate and engage students in the classroom, their outstanding involvement on campus and in the community, and their overwhelming passion for their subject matter.

Nominations were collected through student, alumni and faculty recommendations following an open call to several hundred colleges and universities across the country.

Emerick, who has been teaching at St. Mary’s College since 2011, is described by his colleagues as “an ethicist, who teaches everything from philosophy to environmental studies to women, gender and sexuality studies.” One colleague shares with NerdScholar that Emerick has more non-majors “clamoring to get into his upper-level classes as electives than probably any other professor.”