Upon graduating from St. Mary’s College on May 16, senior David Kersey will move to Pennsylvania to help on his family-run organic farm, with longer-term plans for the Peace Corps. But before the move and before graduation day, like many of his peers, he will hand in a semester-long project for a sustainability practicum course he took this spring from Assistant Professor Barry Muchnick. For his project, Kersey, a biology major from Annapolis, Maryland, chose to compile a cookbook.

“I was going to do it on my own,” Kersey said about writing the recipes for the cookbook. But, he had a bit of an epiphany. He decided to involve the college community in the last project he would turn in as a St. Mary’s College student and leave a lasting contribution to the college’s sustainability efforts. His cookbook will be community sourced, compiled with sustainable food recipes given by the college’s students, faculty and staff. 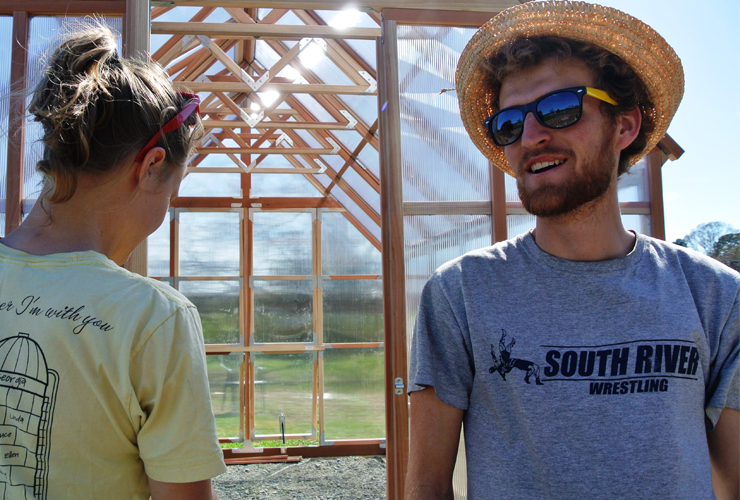 “Sustainability is about social equity, and there’s greater strength in everyone contributing their ideas [to the cookbook]. The community aspect is more effective than any individual,” Kersey said. “Everyone has a recipe tradition in their family; recipes that may be fresh, local and seasonal, and if we can source that knowledge, we can find diverse ways to be sustainable. Food is a pretty central connector to the environment, and it is a simple way to enact sustainability.”

His solicitations for recipes drew excitement from the campus community. Kersey said he received over 30 responses to the first few campus-wide emails. He also engaged with students and campus groups who were happy to help him find sustainable food sources on campus. Kersey said he found the campus’ Vegetarian Co-op to be a great resource and learned that if you volunteer on the Campus Farm, you get free produce in exchange.

But one of the most profound experiences doing the project, Kersey said, was getting recipes from people by sharing his own stories. “Recipes can be very personal, so to inspire people to contribute, I had to get personal,” he said.

In one campus-wide email, Kersey shared this story:  “I remember growing up with meals prepared fresh out of the garden: the crisp, flavorful crunch of raw produce and the changing assortments that accompanied the seasons. It all seemed (and tasted) so right. I am forever affected by my mother’s fresh garden greens salad drizzled in “death-by-garlic” dressing that she seamlessly whipped up after a few short minutes foraging in the garden.”

Kersey is keeping the title of the cookbook simple and “not too flashy”; he said he was thinking of settling on “St. Mary’s College Sustainable Community Cookbook.” The recipes he has received, while healthy and short on prep time—as his submission criteria called for—aren’t so modest. He described one of the more interesting recipes as a vegetarian crab cake, using shredded squash mixed with egg and flour, deep fried in oil and seasoned with Old Bay.