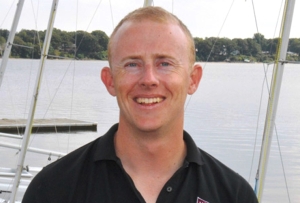 St. Mary’s College of Maryland is pleased to announce the appointment of Conner Blouin as assistant varsity sailing coach. Blouin most recently served as the head sailing coach at his alma mater, Washington College, a position he has held for the past two years. Prior to his return to intercollegiate athletics, Blouin served as a high school coach in both Rhode Island and Florida.

In addition to his extensive coaching experience, Blouin has also had marketing and communications experience within the sailing industry, including working for the governing body of the sport, US Sailing. Speaking about his new role, Blouin said, “I wouldn’t have left my alma mater for just any team. I am excited for the opportunity to work with both Coach Adam Werblow and Coach Bill Ward, and I hope to add to the legacy of St. Mary’s sailing.”

As a student athlete, Blouin was twice named an Honorable Mention All-American and was selected first team Academic All-American. He was inducted into the Phi Beta Kappa (Theta Chapter) at Washington College in 2010 for academics. Blouin holds a master’s degree in sport management from the University of Massachusetts, Amherst.

“The Seahawk coaching staff has followed the illustrious undergraduate, graduate, and professional career of Blouin, on and off the water, and know that he will be an asset to the program,” said Bill Ward, director of sailing at St. Mary’s College. “Conner brings expertise in a variety of boats as both a competitor and a coach. We just love his passion for the sport. Coach Werblow and I could not be more excited to have him join the Seahawk team.”

Ward notes that the newly created assistant coaching position is funded entirely by the generous support of the boat donation program of the St. Mary’s College Boat Foundation, Inc.  “The donated big boats are literally the gift that keeps on giving–first providing opportunities for new sailors to get on the water and later providing the funds to support the college’s sailing program.”

Blouin is currently preparing to represent the United States in the Pan American Games, to be held July 12-19 in Toronto, in the Sunfish class. Also competing in the Games will be St. Mary’s College alumnae Mimi Roller ’13 and Kayla McComb ’13 in the 49erFX class representing the U.S. Virgin Islands.