Among cancer treatments, targeted chemotherapies are valued for minimizing side effects and whole-body toxicity, while delivering damage to malignant cells. To achieve these goals, a chemotherapeutic agent must selectively bind to or target tumor cells or, alternatively, become active in tumor cells but remain inactive elsewhere in a patient’s body.

Researchers at St. Mary’s College of Maryland recently focused their attention on the chemotherapeutic use of an azo- compound (azo- compounds contain a nitrogen-nitrogen double bond) that they designed to convert from an inactive to an active form when exposed to blue or near-UV wavelength light. The compound studied, azo-combretastatin A4, was synthesized by Craig N. Streu, PhD, assistant professor of chemistry and biochemistry at St. Mary’s College.

After working with azo-resveratrol (resveratrol is the “longevity compound” in red wine), Streu turned his attention to the compound combretastatin A4, whose structure resembles resveratrol and 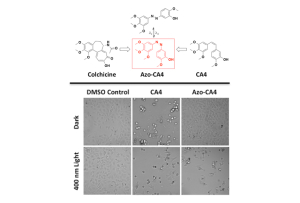 – even more interestingly – is similar to colchicine. Colchicine, first isolated from the autumn crocus in 1820, has long been recognized for its medicinal uses. Among its effects, colchicine is known to impair cell division by disrupting a cell’s microtubules.

When azo-combretastatin A4 is converted from its trans (inactive) to cis (active) form by exposure to blue or UV light, the active form has the same effect as colchicine: It impairs normal cell division by binding to tubulin molecules, preventing them from assembling into microtubules.

But would this work in living cells? To investigate the effect of azo-combretastatin A4 on living cells, Pamela Mertz, PhD, associate professor of chemistry and biochemistry at St. Mary’s College, tested the compound in HeLa cell cultures. Widely used in research, HeLa cells were originally derived from an aggressively growing human cervical cancer.

“A lot of people work with HeLa cells because they’re very easy in terms of working with a cell culture. They’re very hardy cells; they’re not very delicate … HeLa has the advantage of being a stable cell line and not very finicky. They grow and divide and are quite happy,” explained Mertz.

The goal in this study, however, was to determine how activated azo-combretastatin A4 would affect these “happy” HeLa cells. “Tubulin is an important protein that forms the cytoskeleton of the cell, which is very important in terms of the overall architecture of holding the cell together,” Mertz noted.

“A number of different types of chemotherapeutic drugs have been developed specifically to target tubulin. While all cells need it, the idea there, of course, is that you’re trying to target rapidly dividing cells in terms of cancer and hopefully knock those out. … One advantage of trying to develop these more targeted compounds, that you can activate with light, is that you’d have a tool for being more specific, targeting a particular area in the body vs. the whole body.”

Thus, when tested in cell cultures, photoisomerized azo-combretastatin A4 was at least 200 times more toxic to malignant cells than was its inactive form.  Although this was not a clinical study, one obvious question is whether photoisomerization of azo-combretastatin A4 would be feasible for tumors deep in the body. How could light be administered to activate the molecule?

“There are whole groups who work on this problem,” said Streu. “They’ve made little implantable electrode LEDs for photodynamic therapy … We already implant all sorts of things for timed delivery of chemotherapeutics, and one of the things they implant are little LED lights.  We expect that this will be more common as more phototherapeutics are developed.”

Both Dr. Streu and Dr. Mertz also praised the involvement of undergraduate researchers who contributed to this study. “In terms of this paper … almost all of the data were generated by undergraduates,” said Mertz. “If you look at the first four authors, they’re all undergraduates at St. Mary’s …  They really are the ones performing the experiments and they really have ownership over it by the time they finish a project like this.”