Professor of English Jennifer Cognard-Black’s new book, “From Curlers to Chainsaws: Women and Their Machines” (Michigan State University Press, 2016), is a groundbreaking collection of 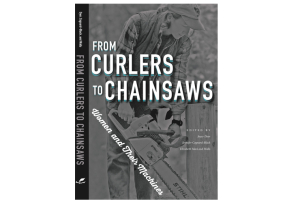 lyrical and illuminating essays about the serious, silly, seductive, and sometimes sorrowful relationships between women and their machines. This collection explores in depth objects we sometimes take for granted, focusing not only on their functions but also on their powers to inform identity. For each writer, the device moves beyond the functional to become a symbolic extension of the writer’s own mind—altering and deepening each woman’s concept of herself.

The twenty-three distinguished writers included in From Curlers to Chainsaws invite machines into their lives and onto the page. In every room and landscape these writers occupy, gadgets that both stir and stymie may be found: a Singer sewing machine, a stove, a gun, a prosthetic limb, a tractor, a Dodge Dart, a microphone, a smartphone, a stapler, a No. 1 pencil and, of course, a curling iron and a chainsaw.

The book was co-edited by Joyce Dyer, professor emerita of English at Hiram College, and Elizabeth Macleod Walls, dean of University College and professor at Nebraska Wesleyan University.

“There are St. Mary’s connections beyond the fact that Joyce and I got the idea for this project while having dinner at Courtney’s [a favored restaurant among students, faculty, and staff],” said Cognard-Black. “Of the twenty-three essayists in the book, seven of them are by women who, at one point or another, came to St. Mary’s as visiting writers or who taught at St. Mary’s on visiting professorships. These include Joyce (of course) but also E.J. Levy, Maureen Stanton, Karen Salyer McElmurray, Ana Maria Spagna, Debra Marquart, Melissa Goldthwaite, and Karen Outen.”

“And even more importantly,” Cognard-Black continued, “Monica Frantz—an alumnae of St. Mary’s and my former SMP student—has an essay in here that is her first publication. In other words, like Books that Cook, in many ways From Curlers to Chainsaws is a St. Mary’s project.”

From Curlers to Chainsaws is available today at www.msupress.org and at fine bookstores.