St. Mary’s College of Maryland has been awarded a $97,361 grant, jointly funded by the Maryland Industrial Partnerships (MIPS) program and vCalc LLC. The grant will fund student research and development of high-value, college-level math formulas and data for vCalc.com, a Wiki-based crowd-sourced calculating encyclopedia with over 7,000 calculators and users in over 100 countries.

“I am pleased that St. Mary’s College of Maryland continues to garner recognition for the excellent educational experience afforded to our students via close collaborative efforts with our faculty,” said Jordan. “Thanks to the Maryland Industrial Partnerships program for funding to support this important collaboration between the College and vCalc.” 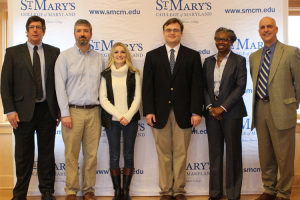 Kaper, a third-year math major with a double minor in computer science and dance, placed fourth in the competition for her equation, “Are Cyclic Groups Isomorphic.”

Jones, a second-year double major in physics and computer science with a minor in math, was the competition’s overall winner with his invention of a Price Comparison Calculator, a tool consumers can use at grocery stores via vCalc’s free mobile app to quickly and easily compare items and determine best buys based on weight/volume.

“I think vCalc has the potential to become a very powerful tool for everything from finances to education to construction,” said Jones.