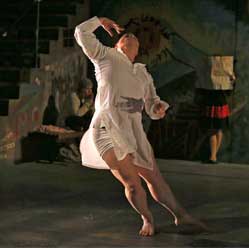 Leonard Cruz, assistant professor of theater, movement, and dance, will perform “Falling Man” as Leonard Cruz Tanztheater at the Judson Church Theater in New York City on March 14. This performance follows a talk Cruz gave in February at the Colloquium of African Diaspora Dance at Duke University, titled “The Celebration of the ‘Negrito’ and other Indigenous tribes of the Philippines.”

Cruz joined St. Mary’s faculty in 2012. Before then, he was a guest assistant professor at Webster University in St. Louis, Missouri. Dr. Cruz earned his PhD at the University of Wisconsin, Milwaukee. His areas of expertise include arts integration, social justice and the performing arts, Asian model minority stereotype, movement and dance, and improvisation. In 1983 he was a Finalist in Young Arts in Miami and was later named Presidential Scholar in the Arts. He is a member of the Phi Kappa Phi and Golden Key National Honor Societies, and is an Advanced Opportunity Program Fellow.