Erin Chase grew up in a Forest Hill, MD and became interested in Maryland politics in high school, when she participated in the Maryland Generally Assembly Page Program. Today, she is double 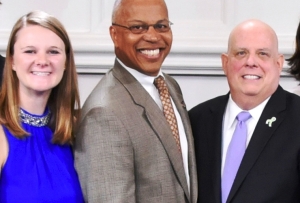 As a dedicated Republican, Chase was interested in how research could help local GOP candidates fare better in a “deep blue” state, so for her SMP, she decided to find out. Chase interviewed elected delegates, executive branch members, news reporters and lobbyists from both parties and asked them a series of questions about how and why the GOP has struggled so much in Maryland.

The first theme to emerge from her investigations was the issue of redistricting. “Registered Democrats in Maryland outnumber Republicans 2:1,” Chase explains, “but we have a 7:1 Congressional split. A lot of that is about redistricting.” She believes the system has been gerrymandered for decades, and would be hard to change.

That said, she found that there are a lot of things local Republicans could do now to increase their chances of winning elections. Most of what she found has to do with “brand messaging.” Based on her research, Chase concludes: “The national Republican brand and the local Maryland Republican brand need to be different. Maryland is very liberal on social issues and marriage equality, abortion and gun reform, and these positions have all been settled here for a while. Some are even already part of the state constitution.” Therefore, instead of trying to push reform on those topics, Chase suggests that Maryland Republicans should focus on other issues that resonate with their base like the economy, jobs and taxes.

This is the path that Republican Governor Larry Hogan took with his campaign in 2015, and Chase and the people she surveyed believe it was the key to his success. Chase thinks that other Republicans need to follow the same path if they want to win statewide and national elections. “Marylanders are not likely to be regressive on social issues, but a lot of Republicans still focus on these topics,” Chase said.

One reason Chase believes the candidates are not taking the “Hogan approach” has  to do with fear of being ostracized from their party. “Many of the elected officials I spoke with mentioned that the opposing party candidates were forced to vote along party lines instead of being independent thinkers or they would lose the support of the party,” Chase added. “But, interestingly, they did not think that same litmus test held true for their own party. Neither party would admit that breaking ranks could get candidates voted out of their districts.” This, she explained, is a real problem for Republicans, who must be more moderate than the national party if they are going to win.

While she can’t say what will happen this fall, Chase hopes the Republicans running for office will take some of the lessons from her findings to heart. She also hopes to work for the Maryland government after graduation.