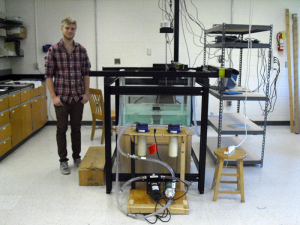 Max Ashley is now a junior at St. Mary’s College majoring in applied physics and minoring in math. He is working in Professor Michelle Milne’s lab, helping to develop a new ultrasound technique that could revolutionize diagnostic heart imaging. If successful, the tool will allow doctors to diagnose heart abnormalities or deformities faster and cheaper than they can with current MRI technology.

“We’re trying to make fiber maps of the heart with ultrasound,” Ashley explained. “Based on the way muscle tissue is aligned, ultrasound either bounces off it or passes through it. That makes precise mapping difficult. When the signal bounces, it scatters. Hearts have fibers going in several directions, so you must factor in both types of data.”

In order to develop and test this new technique he, and other students, have been working to build a new ultrasonic system at St. Mary’s under Professor Milne’s supervision.  The newly designed system has many components. These include computers running the programs, motors moving the ultrasound transducers and samples around, and an oscilloscope, which takes information from the ultrasound transducer so it can be analyzed for information about the sample. Ashley’s first job was to make sure that the components were communicating with each other. “The three pieces all use different digital languages, and we needed to write a program so that they could seamlessly communicate with each other,” he explained.

Now that the system is complete, the team is taking samples and running tests – but not yet on human hearts. Instead, they are using chicken breasts. “Chicken breasts are obviously much easier to obtain than human hearts, and the muscles in them are all aligned in the same way. The human heart is much more complex than chicken breast when it comes to fiber orientation, and also present the issue with scattering before an adequate image can be made. We are using these tests to understand the angular properties of the muscle tissue. Once we know how the rays bounce, we can stack the information and build an algorithm that will work on complex human heart tissue.”

Ashley became interested in Milne’s research when he took her course in the applied physics of medical imaging. “When I learned what she was researching, I asked if I could help,” he recalled. He began working for Milne the summer after his sophomore year, and has continued working in the lab ever since, for independent credit. Ashley plans to stay in St. Mary’s City, Md., and work with Professor Milne this summer and on through graduation. While he does not expect the technique to be ready for market before he graduates, he has enjoyed working on such an important project while still an undergraduate. Ashley, who went to an arts high school in Reisterstown, is a great example of how a liberal arts education can open up new possibilities during college and beyond.