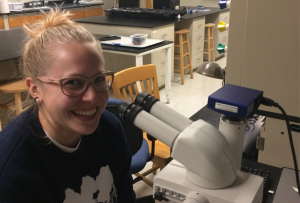 Rylinn Sorini (’16) is a dual major in biology and environmental studies, with a minor in education. Last summer, Sorini began researching the effects of plastics on Eastern Oysters as part of the SMURF program. This year, she extended her research to include three additional experiments on oysters as part of her SMP, entitled “How Does Polyethylene Plastic Impact Crassostrea virginica (Eastern Oyster) Health?,” So far, none of the results are good news for oyster lovers.

Sorini’s first experiment looked at baby oysters (spat) settling preferences when given the choice between polyethylene plastic pieces and natural shell of the same approximate size and shape. Sorini ran her experiment in a settling tank in the aquaculture lab at St. Mary’s and in four natural locations in the Chesapeake Bay. Her experiment demonstrated that tiny oysters prefer natural shell even though the industry uses PVC pipes. It also gave her two good samples to use for further research: one set of spat growing on the natural material, and one getting constant exposure to leeching plastic chemicals through their attachment site.  She found that the oysters exposed to plastic grew more slowly and had a significantly higher mortality rate than the oysters growing on natural shell.

One of the papers Sorini reviewed in her literature search found that exposure to plastics can negatively impact oyster fertility and increase sperm deformity. This study, conducted in England, used Crassostrea gigas a related oyster species. The next step of Sorini’s research will be to see if plastic exposure has similar effects on the Eastern Oyster here in the United States. She suspects it will.

Sorini is also examining the impacts of floating microbead plastics on oysters. Her faculty mentor is Visiting Assistant Professor Laura Eierman. In this experiment, the oysters, which are indiscriminant feeders, are exposed to water that contain microplastics. Microbeads have been found in wild oysters cultured for eating, but little research has been done on how the oysters interact with these contaminants. In her experiment, Sorini used florescent microbeads, then photographed the oyster’s digestive tracks to see if they lit up. Her preliminary results show that the oysters do ingest the particles, and that the material is present in both their digestive system and their gill tissue. The next phase of the project will be to look at whether the plastic particles are causing an immune response. Regardless, the presence of microbeads in the Eastern Oyster tissue is distressing, because, as Sorini explains, “we have a ton of microplastic in the Bay, and if the oysters are absorbing it, we humans are eating those plastics too, through bio-accumulation.”

Microbeads have been banned in the United States, but the ban does not go into effect until 2018. Furthermore, Sorini notes, 90% of the microbeads in the Bay come from larger plastics breaking down naturally — not from added microbeads in household runoff. “The real moral of the story here is that there is far too much plastic trash in the bay,” Sorini says. “Chesapeake Oysters already face a stacked deck with overfishing and a eutrophic environment (caused by excess nutrient fertilizer runoff), and diseases. Plastics are just one more stressor.”

But her findings may not be all bad news. “Who knows,” she says, “maybe oysters can help us filter plastics out of the water!” Next year, Sorini hopes to continue her work on the health impacts of plastic exposure among oysters, and focus her efforts on how we can clean up ocean trash.