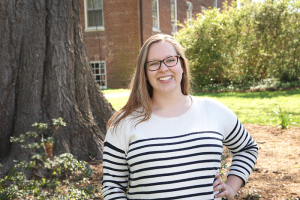 Undergraduate Research Week (April 11-15), sponsored by the Council on Undergraduate Research, provides an opportunity to share the impactful and engrossing research of our students. We’re highlighting one new project each day during the week, kicking off with this one by Allison Claytor (’16).

Earlier this year, the World Health Organization (WHO) declared the Zika virus to be an international public health emergency. This finding was based on growing evidence that the disease is linked to microcephaly in exposed fetuses, and other serious neurological birth defects. Pregnant women have been warned to avoid travelling to more than 30 countries with Zika cases, mostly in Latin America, to minimize their risk. But what about women who live in these areas, which tend to be rural, poor and not accessible?

“These women are being told not to get pregnant for six months to two years,” Allison Claytor (’16) notes. Claytor majors in women, gender and sexuality studies with a minor in film and media studies. She is currently studying the gendered language of Zika for a Gender in Latin American History class taught by Associate Professor Adriana M. Brodsky. “Most of the articles and releases that came out initially were phrased as if these women were the only ones who are responsible for pregnancy. It was not until it became clear that Zika can also be sexually transmitted, rather than only by insect bite, and Pope Francis indicated that it was acceptable to use condoms to stop the spread of the disease, that men came into the picture at all.”

“However,” Claytor continues, “many of the areas with Zika are Catholic, with undereducated and disempowered women who have little or no access to birth control even if they wanted it. Abortion is illegal in many of these countries as well — with only a few exceptions for incest, rape or the mother’s right to live — so the options for women who are infected and pregnant are limited. Even talking about abortion has a strong cultural stigma attached to it. “

For many women, having a “Zika baby’” is a dire prospect, as they do not have the resources to care for a disabled infant. Because of this, Claytor says, there is a noticeable shift in the dialogue surrounding contraception and abortion in these countries that is similar to what happened in the United States in the 1950s and 1960s when epidemics of German measles began.

“Like Zika, German Measles infected fetuses and caused deafness, blindness and other serious birth defects,” Claytor explained. “You saw the same thing happening linguistically back then, where the women were told not to get pregnant. The idea of therapeutic abortions began to emerge as a way to terminate rubella pregnancies.” The epidemic helped de-stigmatize the idea of contraception and abortion in the U.S. and, Claytor says her research shows that Zika may do the same for parts of South America. Already there are stories about women seeking abortifacient pills by mail, and a growing dialogue in the Latin American press about these issues.

“Some of these women can’t afford to have children with mental handicaps, and they are being more assertive about their need for contraceptive and abortion services,” Claytor concludes. “An unexpected consequence of Zika is that it could change the way women are viewed in the culture and even bolster women’s rights.”