You would not know it from looking at him, but this year’s valedictorian, Matthew Flyr, is a survivor. Matt was born with Craniosynostosis, a condition in which the bones of an infant’s skull fuse 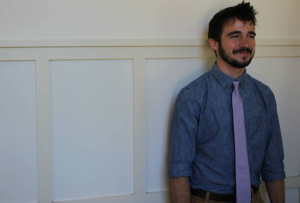 prematurely. The fusing can compress the brain and cause significant impairment or death, if not treated with surgery. Thankfully, Matt was born in Columbia, MD, just a few miles from the country’s top neurosurgeon (later turned Republican presidential aspirant) Ben Carson, who performed successful surgery on Matt when he was just 4 months old.

Matt attended Wilde Lake High School, where he excelled in English, Social Studies and soccer, playing on the varsity team all four years. When he came to St. Mary’s College of Maryland in 2012, he intended to continue playing soccer. However, when he joined his friends who were on the cross-country team, he fell in love with the sport. Last weekend, he won the Academic Athlete of the Year award for cross-country.

Matt also loves rock climbing and being outdoors. He fondly recalls spending his weekends and summers at his grandparents’ home on Kent Island. It was there that he began to make the connection between human activities and water quality. “There were many days where the bay was filled with trash and dead fish. It was gross,” he remembers. When he took an environmental economics class with Professor Amy Henderson, everything clicked. “I did not know that valuing resources was even a thing you could do,” he explained. “It was eye-opening and transformative.” He really appreciated the college’s small class sizes and the humanities approach. “Even the intro classes here challenge you to think instead of memorize and transcribe. It’s exciting to be in an environment where you can talk and explore ideas in class, and have real relationships with the professors,” he said.

The summer after sophomore year, Matt did an internship paid for by the National Science Foundation at the University of Wisconsin, studying lake valuation. This led him naturally to his SMP: “Valuing Water Quality in the St. Mary’s River: A Hedonic Pricing Approach.” In his study, Matt looked at 64 variables, and ultimately found that homeowners are willing to spend $15,000 more for a house by the water for every 1 mg/liter improvement in the dissolved nitrogen level. “This study is probably the most boring thing about me,” he jokes, “but our environmental resources are vital — and because they are not bought and sold on the open market, people don’t value them like they do other commodities. Some people get upset when they see a figure like this because it reduces water quality down to a value, but I argue that having a calculated number is helpful for policy makers. It gives them a figure they can talk about, and helps justify the cost of efforts to clean up and protect the watershed.” 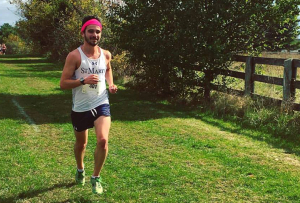 While at SMCM, Matt also continued writing, and won the David & Ginny Rosenbaum award for excellence in journalism for his op-ed “Go Back to Neurosurgery, Dr. Carson,” published in The Baltimore Sun. He also wrote another piece for The Point News about the race talks on campus as part of an independent study with Professor Dowla. While Matt is heading off to Colorado State to pursue a Masters in Agriculture and Resource Economics this fall, he plans to craft a career writing about economic issues for the popular press.

Looking back, Matt says the greatest thing about his time at SMCM was figuring out how to be happy. “One thing we do really well here is balancing academics and fun,” he said. “Before coming to St. Mary’s, I was too focused on schoolwork and getting good grades, but here I learned how important the other half of things is.” His favorite memories include running cross-country, kayaking on the river, and rock climbing.

When asked what Matt will miss most, his answer was simple: the people – the friends and professors that have shaped his time at St. Mary’s College.