This Friday, the River Concert Series will begin. Every Friday for six weeks, music will resonate from the large stage and the speakers set up on the street, people will gather with food and friends on the lawn, children will play on the hill, and venders will set up shop on the street. It’s an amazing sight to behold. Toward the back of the line of vendors, likely the last one at the end of the street, sit the RoboBees, the local FIRST Robotics team. You might think that because they’re so far down the line that they’re boring or have nothing to offer. But that is far from the truth! They need to be at the end because they need the space, and that’s because the RoboBees have rockets. 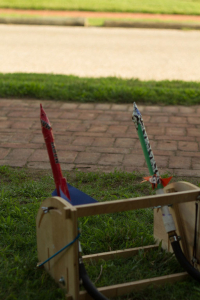 The unassuming booth at the end of College Drive set up under one of the speakers transporting the music from the stage to the street are two booths where for the past two years dozens of children have found themselves making these rockets. Set up on those tables are piles of colored paper, patterned duct-tape and scissors. The team members, all in high school, help the kids who come here make their own paper rockets which they can test out on an air-powered rocket launcher set up a few feet from the booth. The best rockets shoot out over the street, arc high into the warm night air, and come down near a few trees by the pond on the other side where their makers run to retrieve them. Each rocket is tested between five and ten times! Sometimes they come back and make a second or third, always better than the last.

The booth is often busy right up until it’s time to clean up and take the booth, the tent, and the supplies off to be stored until the next Friday. The RoboBees estimate that they make 100-200 rockets a night. “It’s the most popular thing we do,” Erik Wood, RoboBees mentor, said in an interview. This year, the booth will feature the rocket-building, GAK, and paper airplane stations, and display this year’s competition robot “War Hog!”

The RoboBees team 836 have a goal when they go out into the community. They want to spark curiosity in STEM (science, technology, engineering, and mathematics) topics, and they do this by going out into the community to hold events for kids mostly between grades 3 and 7. “We like to use fun, hands-on experiments and activities that take 5-15 minutes to complete. The goal is to show these students that science and math aren’t just numbers and information in a book but that they can also be fun and exciting,” Wood continued.

This is what a FIRST Robotics Team does. FIRST (For the Inspiration and Recognition of Science and Technology) is a program that hosts robotics competitions that revolve around an annual game for which a robot player is to be built. The rules are thorough, laying out not only the rules and goals of the game but also the dimensions of the field and the scoring platforms, the height and width of any ramps or other obstacles or piece of the game. Once the rules are released, construction season begins. FIRST values cooperation, competition, and gracious professionalism. The program’s goal is to inspire young people to become leaders in fields of science and technology by building their skills and “fostering well-rounded capabilities including self-confidence, communication, and leadership,” (First Inspires) By going out into the community, FIRST robotics teams like the RoboBees extend this mentality far beyond the competition itself.

Wood knows how important it is to serve in the community. “Volunteering with the RoboBees not only allows me to do this but also allows me to show students that STEM can be fun.  Hopefully these students will then be more engaged in school and may one day pursue a career in a STEM field.”

Come have a “blast” with the RoboBees!