On a Friday in mid-June, students at Schaefer Hall tested out their optical cloak. Mirrors were lined up at the end of the hallway and a film crew gathered at the other end. Students poked their heads out of a nearby class room to watch as the cloak’s creators stood by. A small dog was led in. Using treats, he was finally coaxed into standing behind one of the mirrors. It was then that the audience saw what an optical cloak did. The dog disappeared. The mirror reflected the door behind it, and the dog should have been there too. Instead, he was gone.

“An optical cloak will make its contents invisible by passing light around the hidden region so that it continues onward in the same direction it originally traveled,” Grossman explained. The ‘toy’ cloaks they made only work from a limited number of angles, but researchers are working on ‘true’ optical cloaks that work from all directions and with all light wavelengths. The group also made another optical cloak, a smaller version made from lenses rather than large mirrors.

“The students are all here for other summer projects, and we’re doing this for fun, education, and outreach,” Dr. Grossman continued. “Besides being a good way to learn some optics, there’s math involved in describing these toy cloaks in the form of geometry and linear algebra.”

The optical cloak project was twofold, an opportunity to test out a project for future classes and a side project to various other internships. Savannah Bergen’s main work involves programming with the research team for vCalc, an online calculator. “The hope for vCalc is that it will be similar to a customizable calculator interface where a user can save pages of equations that are helpful under their own account or create their own programs if they wish.” She’ll be working with professors and students from math, chemistry, physics, economics, and psychology fields to program equations. Bergen is specifically responsible for coding math equations for the vCalc website. She is majoring in math and computer science with a minor in physics and plans on graduating in 2018. Tommie Day is working this summer with Dr. Erin De Pree, associate professor of physics, in the field of theoretical high-energy particle physics. “Particle physics is a field which studies the fundamental particles and forces which make up our universe,” Day explained. “When these particles interact with each other, they may produce different particles.” She’s developing a computer program that could determine “how black holes, massive objects which warp the fabric of spacetime around them, should affect the rates of particle production near them.” Her research will continue as a St. Mary’s Project throughout next year and is supported by the St. Mary’s Undergraduate Research Fellowship (SmURF) Program. Day is a rising senior majoring in physics and computer science. Tyler Jones is a double major in physics and computer science. This summer he is participating in an internship with the vCalc research team. “vCalc is a website that combines wiki-pages and calculators,” Jones explained. “Probably the biggest strength of vCalc.com is its ability to make certain areas of math easier for people who aren’t quite so math-oriented. For example, there are calculators to help with plumbing, construction, and even piano-tuning.” His projects revolve around creating physics-related content. Jones plans to graduate in 2018. Chris Lynch is majoring in computer science with a minor in math and economics. This summer he is participating in an internship with the vCalc research team. His job is to teach students how to code the calculators they wish to add to the database and to be involved with their production. Max Ashley is majoring in physics with a minor in math. This summer he’s an intern at the SMCM Physics’ department ultrasound lab. Under the supervision of Dr. Milne, assistant professor of physics, his work includes testing samples of a 19th-century steamboat for the Maryland Archaeology Conservation Lab. “The goal of this project is to determine how corroded the metal is and whether or not the remaining pieces of the ship are in good enough shape for the MAC Lab to hold onto,” Ashley explained. His work with Dr. Milne will continue over the summer.

This project wasn’t his first in the ultrasound lab, “In the past year, we have focused on the effects of muscle fiber orientation on transmitting an ultrasound beam through an organic sample,” Ashley continued. At this stage in research, Ashley and Dr. Milne are using a chicken breast. “[But] the ultimate goal is to be able to map human hearts with ultrasound.” This would give doctors cheaper, quicker, and more widely available methods to identify deformities and abnormalities. Ashley plans to graduate in 2017. 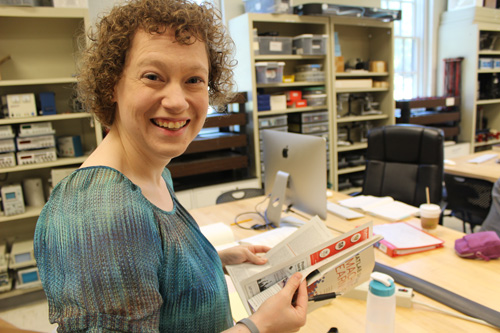