Acclaimed filmmakers in person to discuss their works

(St. Mary’s City) August 18, 2016 – The Department of Theater, Film, and Media Studies at St. Mary’s College of Maryland will host its 10th annual film series, “Black Films Matter: The L.A. Rebellion,” at 8:15 p.m. on Sept. 19, Oct. 3, and Oct. 17. The series will take place in the College’s Cole Cinema, Campus Center, and will highlight the works of three award-winning filmmakers. The film series is free and open to the public. For more information, contact Mark Rhoda at marhoda@smcm.edu or (240) 895-4231, or view the Film Series schedule on the TFMS events website.

About the film series:

This year’s series will feature work of the L.A. Rebellion, a movement of black independent filmmakers that emerged out of southern California in the 1970s. Also known as the Los Angeles School of Black Filmmakers (or L.A. Filmmakers, for short), the L.A. Rebellion constituted a new generation of African, Caribbean, and African-American independent filmmakers, including Zeinabu irene Davis, Haile Gerima, and Charles Burnett, each of whose work will screen during the series.

The L.A. Filmmakers sought to create a new cinematic language that spoke to and for urban working-class blacks through works of social engagement and critique. They rejected the industrial processes of the “Hollywood machine” and the orthodoxies of conventional filmmaking practices. And they did so at a time when the industry began producing Hollywood blockbusters (“The Towering Inferno,” “Jaws,” “Star Wars”) and its studio bosses were seducing black audiences with sensationalized Blaxploitation films, like “Shaft,” “Foxy Brown,” “Coffy,” and “Blacula.” The L.A. Rebellion succeeded where white Hollywood and Blaxploitation did not: in representing black life from an “insider,” or black, perspective, something that was conspicuously absent from the mainstream movie screen at the time.

Monday, Sept. 19, at 8:15 p.m.: Screening of “Spirits of Rebellion” (dir. Zeinabu irene Davis, 2015), a compelling documentary on the L.A. Rebellion and the artists associated with the movement. Recipient of the prestigious Africa Movie Academy Award for Best Diaspora Documentary feature, Nigeria. A Q&A with director Davis follows the screening.

Monday, Oct. 17, at 8:15 p.m.: Screening of “Killer of Sheep” (dir. Charles Burnett, 1977). Like “Bush Mama,” an early, seminal film from the L.A. Rebellion. “Killer of Sheep” was among the first titles named to the Library of Congress’ National Film Registry and was declared by the National Society of Film Critics one of the “100 Essential Films” of all time. A Q&A with director Burnett follows the screening. 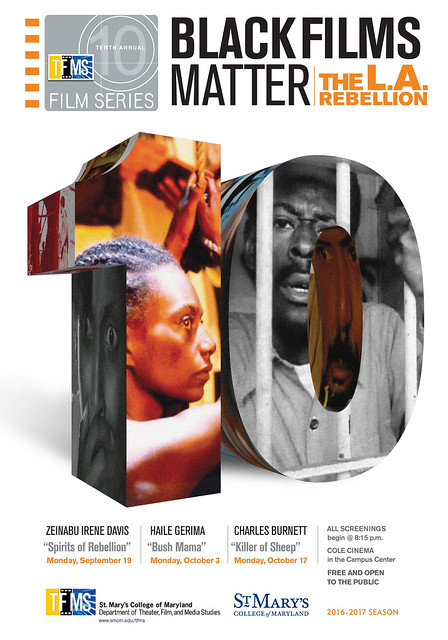