The Jamie L. Roberts family donated $2.2 million to the College, with a portion of their total donation enabling the College to complete its $2.5 million capital campaign. The completion of the campaign allows the College to utilize more than $75 million in State of Maryland funding. The Jamie L. Roberts family gift is the single largest gift in the history of the College and made in honor of Jamie L. Roberts, a St. Mary’s College class of 2011 economics major and three-sport star athlete who was tragically killed in June 2014 while riding her bicycle across the country in the 4K for Cancer event, which raised money for the Ulman Cancer Fund to support young adults impacted by cancer.

“This day is the culmination of many people coming together to accomplish a goal that will aid both the College and the community,” said Dr. Jordan. “We are honored to have the support of the family of Jamie Roberts, whose generosity helped finish our campaign. Thank you to the Governor and Legislature for this tremendous and transformational opportunity. And, thank you to the record-breaking number of donors – students, employees, parents, community members, and our alumni – whose support is a testament to their dedication and commitment to St. Mary’s College of Maryland.”

Chairman of the Board of Trustees Sven Holmes also thanked the Governor and Legislature: “State funds of more than $75 million will enable St. Mary’s College to significantly enhance programs, not only with the addition of the athletic stadium, but also with the completion of a new academic building. The project in its entirety will aid our students and provide cultural and economic benefits to the community as a whole.”

Upon completion, the 4,200-square-foot lighted stadium, including team rooms, a track, bleachers, press box, restrooms and concessions, will be situated between synthetic and grass fields on Mattapany Road. The capital campaign also supports the completion of a new 52,289-square-foot academic building to house the College’s music department, a 700-seat auditorium, educational studies department, which includes the Master of Arts in Teaching program, and a multi-discipline learning commons area.  The entire project is to be completed by 2022.

St. Mary’s College began raising funds for the capital campaign in earnest in January 2015. By April 2016, $1.5 million of the goal had been reached. By June 30, the campaign goal was reached through a portion of the Jamie L. Roberts family gift. 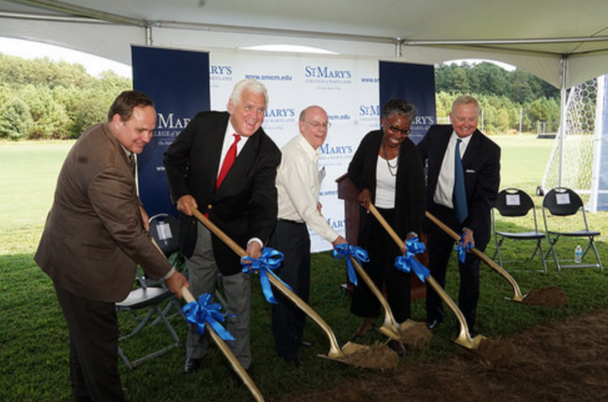