For her thoughtful leadership, visionary philanthropy and committed service to St. Mary’s College of Maryland, the courtyard of the new Anne Arundel Hall was named after the college’s trustee, Gail Harmon.

“Since she first came to St. Mary’s County in the late 1970s, Gail has been a stalwart neighbor and supporter of St. Mary’s College of Maryland – her leadership, service and philanthropy are unwavering,” St. Mary’s College President Tuajuanda Jordan said Saturday during a dedication ceremony for the hall.

Harmon, who has served as a member of the board of trustees since 2007, was board chair from 2013 to 2016 and is currently the chair for the institutional advancement committee.

She is a partner at Harmon, Curran, Spielberg, and Eisenberg in Washington, D.C. where she provides strategic advice to a wide range of progressive foundations, charitable and lobbying organizations, associations, and political action committees on federal tax law, federal election law, and other legal issues.

Harmon’s affection for St. Mary’s County and its institutions began in the late ’70s when she and her husband John purchased Tippity Wichity Island on the St. Mary’s River just north of the College.

Jordan explained that in addition to scholarship, Harmon has supported the Center for the Study of Democracy, an environmental leadership program and the recent $2.5M Building Challenge.She also created the Harmon Fund for Faculty Innovation.

“St Mary’s provides that, so I am willing to spend many hours supporting its mission,” she said in a recent statement.

As the plaque was unveiled Saturday, Jordan, with Harmon at her side, said she was pleased to announce the beautiful patio, fountain and garden, “this amazing vista toward Historic St. Mary’s City and North Campus – shall be named the Gail Harmon Courtyard.” 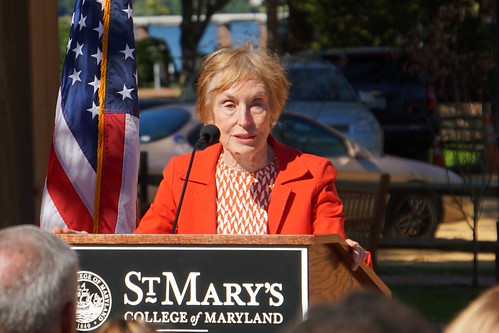 St. Mary’s College of Maryland Board of Trustees member Gail Harmon addresses the audience Saturday during the dedication ceremony for the new Anne Arundel Hall.