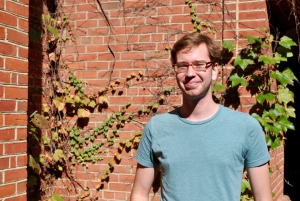 Julian Erville ’17 will represent St. Mary’s College of Maryland on Sunday, Nov. 6, at George Washington University in the final round of the Jiangsu Cup, a Chinese speech contest open to undergraduates and graduate students in the Greater Washington Metropolitan area who have studied Chinese. Students whose native language is Chinese are not eligible for the competition.

Erville, 21, was selected as one of 17 finalists for the final round of the competition, having advanced from the first round in early October. Erville is the first student from the public honors college to make it to the final round. He is a math and English major studying the Chinese language as a minor.

“His participation and selection as the finalist will give students in Chinese confidence to participate in this and other competition and to energize Chinese language studies. I am very happy and proud for him and for the program,” said Professor Jingqi Fu of the International Languages and Cultures Department at St. Mary’s College.

Erville said he is looking forward to representing St. Mary’s College at the competition. He said he took an interest in learning the Chinese language while attending St. Mary’s College and says he is conversational in the language but not fluent.
Erville said he has no expectations to win but will do his best.
He said he is more interested in helping get the word out about the opportunity to study Chinese at the College and getting more students interested in the courses. Regardless of what year one is at the College, “It’s not too late to start,” he said.