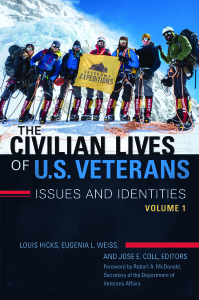 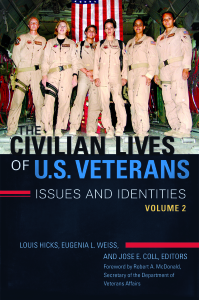 Professor of Sociology  Louis Hicks was co-editor on the recently released book,”The Civilian Lives of U.S. Veterans: Issues and Identities” with a forward by Robert A. McDonald, secretary of the Department of Veterans Affairs.

This in-depth study looks at life after the military, considering the dual conundrum of a population benefiting from the perks of their duty, yet continuing to deal with trauma resulting from their service, and of former servicemen and servicewomen trying to fit into civilian life – in a system designed to keep them separate. Through two comprehensive volumes, essays shed light on more than 30 topics involving or affecting former servicemen and servicewomen, offering a blueprint for the formal study of U.S. veterans in the future.

The electronic version is available here and here. Paper copies will be available in coming weeks.