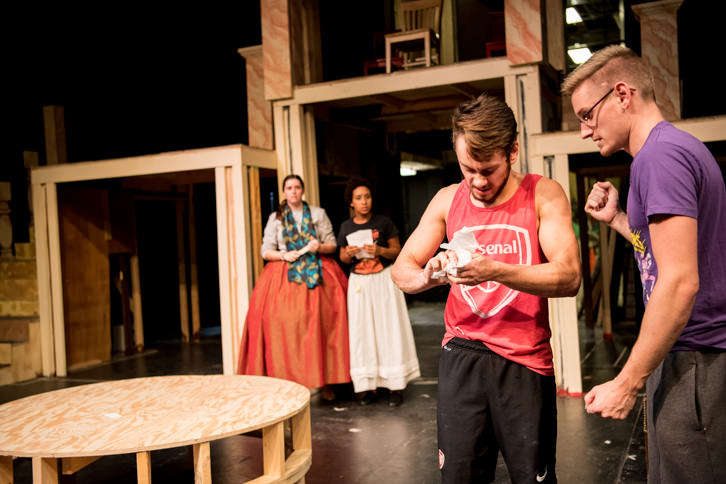 “The Marriage of Figaro,” Pierre de Beaumarchais’ fast-paced comic romp across one day in Count Almaviva’s castle of Aguafrescas, runs December 7-10 at 8 p.m. and December 11 at 2 p.m. in the Bruce Davis Theater, Montgomery Hall, on the St. Mary’s College of Maryland campus. An informal talk-back with cast and crew follows the opening night performance on December 7. Ticket prices are $4 for teachers, students, St. Mary’s College staff, senior citizens, and Arts Alliance members; $6, general admission. To make reservations, email the Theater Box Office at boxoffice@smcm.edu or telephone 240-895-4243.

Beaumarchais sets his play in the Count’s castle in Andalusia, Spain, which is really a cover for Paris, France and the court of Louis XVI and his queen, Marie Antoinette.

The marriage between servants Figaro (Alexander Rhoades ’17) and Suzanne (Miranda Hall ’20) is set. For today. But the notorious womanizing Count (Ryan Rhoades ’19), Figaro’s boss, has another thing in mind – the resurrection of an ancient custom that threatens to put the household into a tailspin and Figaro’s marriage on the rocks. Add to that a bevy of claims and counterclaims against lovers supposed or real, and you’ve awoken to a madcap day in Count Almaviva’s castle.

Written between 1775-1778, “The Marriage of Figaro” only reached the famous Comédie Française theater in 1784, five years before Parisian revolutionaries and mutinous soldiers stormed the Bastille, an act that sparked the French Revolution of 1789 and inspired a fledgling nation across the Atlantic.

During the politically volatile years just before the Revolution, Beaumarchais’ play aroused governmental anger for two principal reasons, both of which purportedly helped ignite the revolutionary spark: its outright calls for social equality and its seeming contempt for the nobility, especially for the likes of one Count Almaviva. Servants, it seemed, were much cleverer and more humane than the aristocracy they served. Furthermore, the character of Figaro, majordomo of the Count’s castle, and his female counterpart, Marceline, could be downright insolent, “forgetting their place” in the presence of the Count. Servile, they refused to be.

“The Marriage of Figaro” is produced by St. Mary’s College of Maryland’s Department of Theater, Film, and Media Studies and is directed by faculty member Mark A. Rhoda