Produced by the Department of Theater, Film, and Media Studies and directed by faculty member Daniel Bear Davis, “On Contentious Grounds” is a devised movement theater piece developed from interviews Davis conducted with Palestinian occupants of the West Bank about their experiences of movement in their daily lives and ancestral histories. Davis has spent considerable time in Israel and Palestine as a teacher and practicing theater artist.

“There has rarely been a place I felt as at home with the people than I did in Israel,” Davis says. “While I was there I spent a great deal of time asking Israelis about their experience in the military, the history of the land, and their relationship to the West Bank.”

“I spent about 10 days in Ramallah and Jericho traveling, talking to people and working with dancers who teach in refugee camps and schools, and asking around to find out how performance was being used to create dialogue and to address trauma.

“I set up a project to interview Palestinians in subsequent trips to the region. These interviews form the inspiration and much of the content of ‘On Contentious Grounds’.”

The ensemble of performers in “On Contentious Grounds” uses dance, theater, and personal story to investigate the intersections between daily life in Occupied Palestine and present-day issues relevant to our own lives. By alternating between the contested borders of Israel and Palestine and the students’ own histories of contested borders, the performance creates an intimate reckoning with the privileges and impossibilities of movement in our world.

“How do borders shape bodies?” Davis asks. “Borders – in the form of walls, laws, language, access to information, etc. – shape our mobility and experience of the world.”

“On Contentious Grounds” performs March 1-4 at 8 p.m. and March 5 at 2 p.m. An informal talk-back with cast, crew, and director follows each performance. 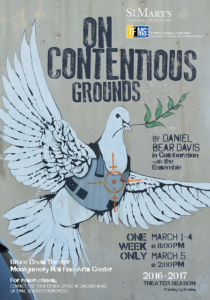