St. Mary’s College of Maryland is pleased to announce that Neil Irwin ’00, senior economic correspondent at The New York Times and author of “The Alchemists: Three Central Bankers and a World on Fire” (Penguin Press, 2013), will deliver St. Mary’s College’s commencement address. The commencement ceremony will be held on the college’s Townhouse Green on Saturday, May 13, starting at 10 a.m. 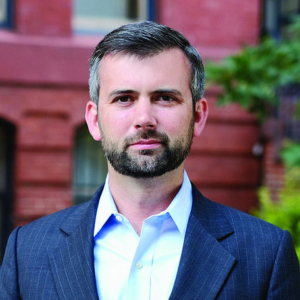 As senior economic correspondent at The New York Times, Irwin writes for The Upshot, the Times’ website for analytical reporting on politics, economics, and everyday life.

“The Alchemists” was a New York Times Bestseller and was short-listed for the Goldman Sachs-Financial Times Business Book of the Year Award. It appeared on best-books-of-the-year lists from media outlets including the Wall Street Journal, Washington Post and NPR. For The New York Times, Irwin has written on topics as varied as Britain’s decision to leave the European Union, the Trump administration’s trade and tax policies, and the economic roots of the rise of populist movements.

Previously, Irwin was a columnist at The Washington Post and economics editor of Wonkblog, the Post’s website for analytical journalism. From 2007-2012 he was the Post’s beat reporter covering the Federal Reserve and economy. He has often appeared on television analyzing economic topics, including the PBS NewsHour, CNBC, and MSNBC.

Irwin has won two “Best in Business” awards from the Society of American Businesses Editors and Writers, in 2005 and 2009, and one of his articles was published in the anthology, “The Best Business Stories of the Year: 2003 Edition.”

He has an MBA from Columbia University, where he was a Knight-Bagehot Fellow in Economic and Business Journalism. He is an alumnus of St. Mary’s College of Maryland and he served as a member of the College’s board of trustees from 2007 to 2013.