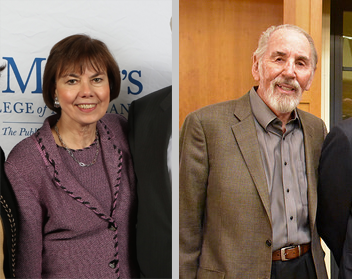 Bonnie Green has served the Board of Trustees or the College’s Foundation Board for 20 years. As executive director of the The Patuxent Partnership, she was recognized as providing a critical link between the College, the Patuxent River Naval Air Station and its contracting community, in particular regarding the College’s efforts in the STEM fields. She is a 1974 alumna of the College, and since then has actively engaged students, including the creation of a summer internship program at the Maritime Administration of the U.S. Department of Transportation and American President Companies, Ltd.

Harry Weitzel, Jr. has been a member of the Board of Trustees or the College’s Foundation Board since 1992. Weitzel was recognized for his dedication to the College, by providing business acumen and financial expertise, and serving as a valuable ambassador on the College’s behalf to an extensive network of stakeholders. Throughout his career in the financial services and banking industry, he was civically involved with such groups as the University of Maryland School of Business, the Maryland Industrial Partnership, The Center Club, the Baltimore Museum of Art, the Association of Reserve City Bankers, and the American Bankers Association and Historic Annapolis, Inc.

Learn more about the St. Mary’s College of Maryland Foundation