St. Mary’s College of Maryland, the state’s public honors college, graduated 29 students with Master of Arts in Teaching degrees on Friday, June 2, in the Auerbach Auditorium of St. Mary’s Hall.

The commencement address was delivered by Elias Vlanton, a retired Prince George’s County teacher and freelance journalist. In 2009 Vlanton was awarded an honorary doctorate of letters from St. Mary’s College for successfully assisting low-income students attend college. He mentored more than 100 college-bound students, many of whom would not have otherwise attended. In addition to several articles on education, he is author of a cold war study, “Who Killed George Polk? A Press Covers Up a Death in the Family” (Temple, 1997). 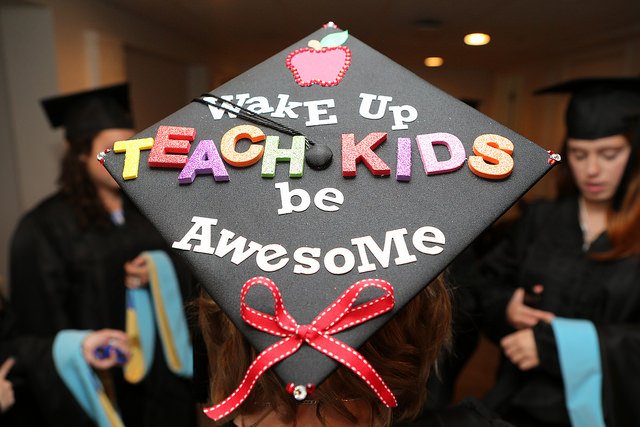 MAT graduates Austin Gore and Margaret McCoy Padukiewicz were chosen as this year’s student speakers. Gore spoke about the fears that followed him from high school to college and the fears he has of his future as a teacher. He concluded by saying, “Thank you to my colleagues about to receive their degrees today. Without you, my fear would have never turned to optimism.” Padukiewicz followed, telling her fellow graduates: “As students, we have been instructed and challenged by our professors, guided by our mentors, evaluated and cheered on by our supervisors and now must step into the role of teacher and implement our knowledge and skills in our very own classrooms.”

The student speakers were followed by a musical selection, “In My Little Corner of the World,” by Lee Pockriss with lyrics by Bob Hilliard; Alexandra Kennedy, vocals; Maureen Monk, flute; Mason Redmond, bass.

At the conclusion of the ceremony, President Tuajuanda C. Jordan conferred the graduates, stating, “On behalf of St. Mary’s College in recognition of your successful completion of the curriculum, I am pleased to admit you to the degree of Master of Arts in Teaching, with all the rights, privileges, and responsibilities pertaining thereto.”

The Master of Arts in Teaching degree at St. Mary’s College is a full-time, 11-month program. Certification programs exist for elementary certification in grades one through six, and secondary English, math, social studies, biology, chemistry, physics, and theater for grades seven through twelve. Art, music, and foreign language majors may also certify in their disciplines for grades pre K-12. To learn more about the program, visit www.smcm.edu/mat or email mat@smcm.edu.