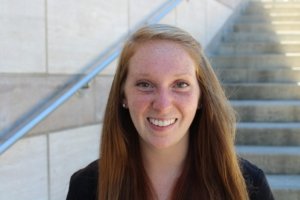 Steyert spent the summer conducting hands-on research at the University of California, San Francisco in the Basbaum Lab under the department of anatomy. The Basbaum Lab is conducting research to better understand the pathways that underlie the sensation and integration of pain. While the sensation of pain is understood, the integration is a much more complex subject in need of better understanding through research.

According to Steyert, “My mentor (UCSF researcher) Line Loken and I were studying a population of neurons in the spinal cord of mice that was previously uncharacterized. We found that these neurons are most likely involved with integration of pain signals at the spinal cord level, even before the signal is sent to the brain. Further studies will determine whether these neurons are tied to a specific pain behavior.”

She also credits Professor of Biology Karen Crawford’s anatomy and physiology class in preparing her intellectually for internship. Steyert said, “It inspired me to think about the relationship between form and function in biology, which was ultimately the key to this project.”

Steyert is one of nearly 350 students globally this year accepted to the Amgen Scholars Program from over 5,600 applicants. The program partners with 17 leading educational and research institutions across the U.S., Europe, and Japan to host scholars in research labs. Ninety-four percent of the program’s alumni who have completed their bachelor’s degree are currently pursuing an advanced degree or career in a scientific field.