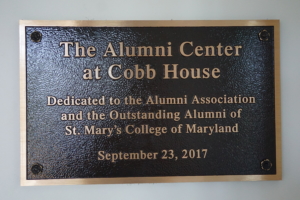 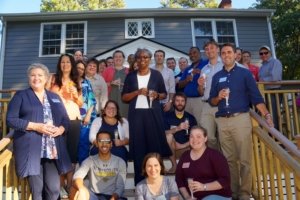 The Alumni Center at Cobb House, the long-standing, newly renovated building, will house the Office of Alumni Relations and provide dedicated space for alumni and the campus community to gather.

“The multiple meeting rooms and state-of-the-art presentation system included in the renovations make this an ideal space for student programming, and in fact, we’ve hosted more students for club retreats and Career Development Center programs here in the past two weeks than we ever have in our previous facilities,” Director of Alumni Relations David Sushinsky said.

The College purchased the two-story house and property — 3.4 acres — from Col. Lawrence L. and Etoile Bernhardt Cobb in 1968. It was initially purchased for use as the College president’s residence. The last president to reside in the house was Edward T. Lewis in the 1990s. After that, several departments and offices were located in the house, including Human Resources and International Languages and Cultures.

International Languages and Cultures left the Cobb House in fall 2016 when Anne Arundel Hall opened. A short time later, renovations began and the Alumni Office moved into its new home over the summer.

“The Alumni Center at Cobb House is simply incredible and I’m grateful that we have such a beautiful facility to welcome our alumni back to campus,” Sushinsky said.