SMCM Newsroom > Featured News > An Evening to Honor the Legacy of Lucille Clifton at St. Mary’s College of Maryland 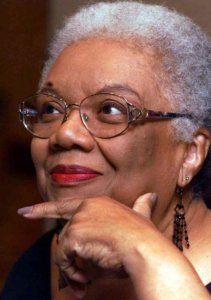 The Office of the President presents “Nurturing the Compassionate Community: An Evening to Honor the Legacy of Lucille Clifton” on Thursday, March 1 at 7:30 p.m. (doors open at 7:00 p.m.) in Daugherty-Palmer Commons. The event, co-sponsored by the VOICES Reading Series, is free of charge and open to the public.  The evening will feature poetry readings and reflections to honor St. Mary’s College’s former Distinguished Professor of the Humanities Lucille Clifton.

Aracelis Girmay will receive the Lucille Clifton Legacy Award during the event. Girmay is the author of three poetry collections, “Teeth,” “Kingdom Animalia,” and most recently, “The Black Maria,” as well as the collage-based picture book, “changing, changing.” Her book, “Kingdom Animalia,” was selected as a finalist for the National Book Critics Circle Award. Girmay was awarded a Whiting Award in 2015, where the judges noted that her poems “are always in service of a moral vision, a deep concern for who we are and who we have become.” Born and raised in California, she has degrees from Connecticut College and New York University. Girmay has received numerous recognitions and fellowships and currently teaches at Hampshire College and Drew University’s Master of Fine Arts in Poetry program.

Girmay was nominated by Elizabeth Alexander. Alexander was born in Harlem, New York, but grew up in Washington, D.C. She is a renowned poet, essayist, playwright, scholar, and social justice arts advocate who is a chancellor of the Academy of American Poets, the Wun Tsun Tam Mellon Professor in the Humanities at Columbia University and director of creativity and free expression at the Ford Foundation. She previously served as the inaugural Frederick Iseman Professor of Poetry at Yale University, where she taught for 15 years and chaired the African American studies department. In 2009, she composed and delivered “Praise Song for the Day” for the inauguration of President Barack Obama. Her latest book, “The Light of the World,” was released to great acclaim. Alexander has published six books of poems, two collections of essays, and a play. Her book of poems, “American Sublime” (2005), was one of three finalists for the Pulitzer Prize and was one of the American Library Association’s Notable Books of the Year.

Both Girmay and Alexander will perform original works of poetry during the event.

Lucille Clifton was one of the most distinguished, decorated, and beloved poets of her time. She won the National Book Award for Poetry and was the first Black recipient of the Ruth Lilly Poetry Prize for lifetime achievement. Her honors and awards give testament to the universality of her unique and resonant voice. In 1987, she became the first author to have two books of poetry— “Good Woman” and “Next”— chosen as finalists for the Pulitzer Prize in the same year. She was named a Literary Lion of New York Public Library in 1996, served as chancellor of the Academy of American Poetry and was elected a fellow in Literature of the American Academy of Arts and Sciences.