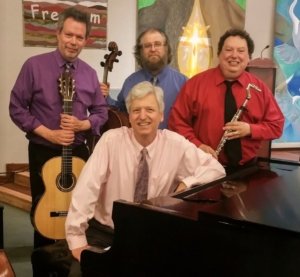 On Tuesday, March 20, at 7 p.m., the Clazzical Project comes to St. Mary’s College of Maryland.  Enjoy classical pieces which will then be blended with jazz renditions, along with humorous “anecdotes” about each piece designed to educate and entertain.  Featured are Don Stapleson (flute), Pete Fields (guitar), Fred Lieder (cello), and guest pianists Brian Ganz, Eliza Garth and Beverly Babcock. Soprano Jennifer Cooper will also be featured. The Clazzical Project will be joined by students of the College who will be featured in the performance. The concert will be held in the Auerbach Auditorium of St. Mary’s Hall on the College campus. The program is free of charge and open to the public. Donations will be warmly appreciated and will make future concerts possible. More information at 240-895-4498 and http://www.theclazzicalproject.com .

Brian Ganz will perform the Maestoso from Chopin’s Piano Concerto No. 2 in F minor, Op. 21, with colleague Beverly Babcock playing the orchestra part on a second piano. The Clazzical Project will then offer a jazz interpretation of the same work.  Eliza Garth will perform George Crumb’s “Eine Kline Mitternachtmusik,” based on Thelonius Monk’s Around Midnight.

The Clazzical Project is a cross between tradition and, as aptly coined by the group, “outside the ‘Bachs’,” making it accessible to music lovers of all kinds. After hearing the classical rendition, you will enjoy “ingenious and beautiful juxtaposition of jazz treatments against iconic classical melodies” according to Jeffrey Silberschlag, music director of Chesapeake Orchestra and Italy’s Alba Music Festival. The performance will take you on a journey of mind bending “What ifs,” combining famous classical works with improvisational jazz.  Through stories both fictional and funny, commentaries on each piece include an almost believable fantasy.  They allow you to imagine the possibility of unusual collaborations between classical composers and jazz artists, surprising the listener again and again.

The Classical Project trio combines well-known musicians who discovered their mutual love of improvisation, storytelling and their ‘outside the box’ musical tastes. Don Stapleson (flute) is the former director of the St. Mary’s College Jazz Bands, performs with his group, “The Don Stapleson Quartet,” and has performed with Ray Charles, Wayne Newton, Nancy Wilson, and Martha Reeves. Pete Fields (guitar) has mastered diverse musical styles and unique guitar techniques with performances in the U.S. and Europe.  His repertoire ranges from classical guitar to jazz and Latin music. His release “Stillness of the Heart” is a collection of compositions for classical guitar and has received airplay throughout the country. Fred Lieder (cello) has been a fixture on the Washington area music scene playing classical, jazz, blues, rock and Celtic. Lieder released his solo instrumental tunes on “Cello Blues” and his first book, “My Cello Has the Blues.”

Pianist Brian Ganz is known for his mastery of classical music and is considered a leading pianist of his generation. He has performed world-wide with major symphonies. Pianist Eliza Garth is a pianist “who boasts an exceptional warmth, beauty of sound, and vocality of phrasing,” states The Boston Globe. She has a new CD, “Tour de Force,” released on the Albany label. Vocalist Jennifer Cooper captivates and commands the stage with a presence that leaves you begging for more. Pianist Beverly Babcock is a beloved faculty member and accomplished pianist who prefers playing piano over cleaning the house.