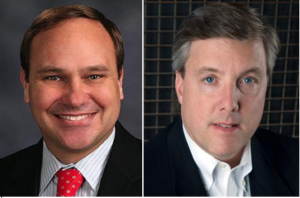 St. Mary’s College of Maryland’s Center for the Study of Democracy presents “Key Issues in the 2018 Midterm Elections,” on Wednesday, April 18 at 6 p.m. in Auerbach Auditorium of St. Mary’s Hall on the College’s campus. The event is free of charge and open to the public.

There have only been three midterm elections in the last century where the president’s party didn’t lose House seats.  This year, the country is divided and passions roil among both liberal and conservative voters. What are the most salient issues in the minds of the party strategists, running politicians and voters during this election cycle? These and your questions will be discussed by Steve Waugh, the Republican state senator for Calvert and St. Mary’s counties, and Democratic strategist Steve McMahon, a regular on MSNBC’s “Hardball with Chris Matthews” and “Meet the Press Daily with Chuck Todd.”

Senator Steve Waugh is the Republican state senator for Calvert and St. Mary’s counties. Among his committee assignments are those in the Education, Health and Environmental Affairs Committee; Maryland Redistricting Reform Commission; Commission on Innovation and Excellence in Education; and the Task Force on Rural Internet, Broadband, Wireless, and Cellular Service.  He works as a systems engineer at the Johns Hopkins University Applied Physics Laboratory.

Steve McMahon is an attorney and co-founder of Purple Strategies, where he serves as chief executive officer. He got his start in politics in the Senate and on the political staff of Senator Edward M. Kennedy, and has worked on dozens of Senate, gubernatorial and mayoral campaigns across the country. McMahon has served in senior roles in three presidential campaigns, and produced the advertising in support of then Senator Barack Obama for the Democratic National Committee in the 2008 presidential campaign.

The Center for the Study of Democracy (CSD) explores contemporary and historical issues associated with the ideas of democracy, liberty and justice in national and international contexts. It supports research that enhances our understanding of liberal democracy and its critics. The CSD facilitates activities that strengthen democracy and the rule of law; enhance security and individual freedoms; invigorate the civil society; encourage free enterprise; and increase economic, environmental, educational and cultural equity.