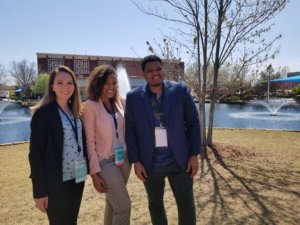 St. Mary’s College students and faculty traveled to the University of Central Oklahoma in Edmond, Okla., for the National Conference on Undergraduate Research (NCUR). Accepted students are invited to present their undergraduate research from a variety of disciplines. After a competitive review, three St. Mary’s College students were awarded the opportunity to share their research and academic achievements.

Hannah Murphy ’18, an international languages and cultures major studying Spanish, conducted research on increasing the retention of critical thinking skills in students that speak English as a second language. Using local middle school students as her focus, she developed critical thinking skills using articles in the students’ native language, and showed that those skills transfer over when students use English. Murphy hopes to promote the importance of native languages and how they can be used to better the students educational experience, instead of hindering it.

Sidi Chleuh ’18, an international languages and cultures major with a double concentration in French and Spanish, presented his research on Fulbe oral literature. The Fulbe are an ethno-linguistic group located in West Africa and have had their linguistic culture influenced by the spread of Islam and colonization. Through his research, Chleuh hopes to revive the importance of the Fulbe language and show how Fulbe proverbs impact culture throughout time. Chleuh conducted much of his fieldwork in the Republic of Guinea, collecting notes on the Fulbe language from the former colonial administration records, as well as past anthropological work. He presented his findings and showcased how Fulbe proverbs impact local identity, as well as influence values and knowledge. Chleuh conducted much of this research in the summer of 2017, as part of the St. Mary’s Undergraduate Research Fellowship program.

Chikondi Kulemeka ’18, a double major in psychology and international languages and cultures with a concentration in French, presented “Beyond the Veil: Exploring the Many Layers of Muslim Women’s Identity in Nice, France.” Seeing the rising rate of Islamophobia in Europe, Kulemeka researched the daily life of Muslim women in France. She focused her research on one woman particularly: a woman born in Morocco, but who grew up in France and is currently attending Nice University. Kulemeka used this woman as a main focus of her interviews and research, helping to describe the bigger picture of the female Muslim experience in France as a whole. Through interviews and a detailed literature review, Kulemeka shed light on the unique perspectives that these female Muslim individuals have as they navigate through their layered identities.

Past St. Mary’s College students who presented their work at NCUR include Elizabeth Wenker ’17 and Brad Davidson ’17 with their research on white-crowned sparrows with Assistant Professor of Biology Jessica Malisch (NCUR 2017) and Alex Schoen ’17 and Mary Korendyke ’19 with their mathematical modeling research with former Associate Professor of Mathematics Katherine Socha (NCUR 2016).