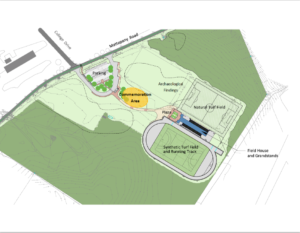 The Commemoration Committee of St. Mary’s College of Maryland is working with several common themes developed from its focus group work to help conceptualize the area where evidence of slave quarters was uncovered during an archaeological site survey on Mattapany Road.

According to Jeffrey Coleman, Commemoration Committee chair and professor of English and African and African Diaspora Studies program coordinator, the committee spent the past year discussing plans for a commemorative site. As part of its ongoing efforts, focus groups were conducted in November 2017 with members of the campus and local community.

Coleman explained that four themes emerged from these discussions: “The Past is Never Dead” (a quote from William Faulkner); “Resilience is the Quality that is the Result of Resistance and Perspective;” “Redemption;” and “Making the Invisible Visible.”

The College is currently in the process of obtaining the services of a consultant to assist in the selection of an artist to create the commemoration installation. Once hired, the consultant will aid the College in creating criteria based on feedback from the November focus groups and the four themes. The criteria will help the College create and issue a request for qualifications to hire designers/artists and help in the selection process.

The College has identified an area of half an acre, adjacent to the archaeological site area, and along the path from the planned parking area to the in-development Jamie L. Roberts Stadium. This location is about 300 feet southeast of the intersection of College Drive and Mattapany Road.

The budget for the commemoration project is supported by $500,000 in Maryland State funds, with St. Mary’s College funding the design effort.

In February 2017, St. Mary’s College opened an exhibition in the Boyden Gallery that was intended to help educate students and the public about the College’s relationship to slavery. The exhibition revealed for the first time a clear tie between slavery and St. Mary’s Female Seminary. Later, during the completion of a survey of the site of the Jamie L. Roberts Stadium, additional evidence of slave quarters was uncovered.