“The Greece Study Tour was by far one of the best experiences in my college career. We visited a variety of historical sites and museums, which are breathtaking when you get to see them in real life. We were led by knowledgeable professors who helped provide a very educational and safe tour of Greece. I would recommend this trip to everyone who asked, and if I had the chance I would go again without a second thought!” — Jessica M., 2010 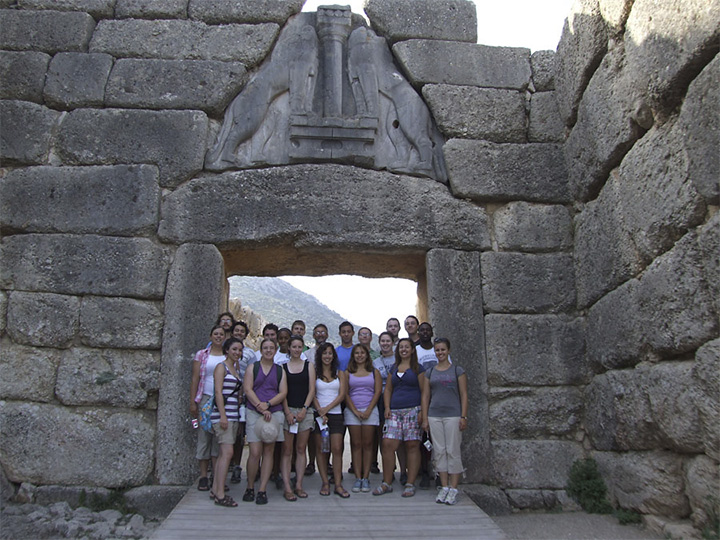 The 2022 Greece study tour is being proposed for June 6-29. Much information about it is available via the links on the left side of this page (Itinerary, Requirements, Materials, etc.).

The 2022 Greece Study Tour will be the thirteenth run by Professor Michael Taber, Department of Philosophy and Religious Studies at St. Mary’s College of Maryland, offering participants (whether current students at any university, or alumni, or just people who’ve wanted to see this amazing land–we’ve had all of the above) an opportunity to gain a first-hand understanding of the layering of history in this part of the world.

This course can be registered for as any of the following St. Mary’s courses (4 credit-hours):
English 380–Studies in World Literature: Greece Study Tour

The course can also be used to satisfy the requirements of the Democracy Studies area, in consultation with the Coordinator of Democracy Studies, by registering for it either as HIST 393 or RELG 380 (which are on the list of DMST-satisfying courses), or as the four credits normally satisfied by independent study, internship, or directed research.

How to decide which course to take this as? A student’s major or minor sometimes decides that matter. Apart from that, ask yourself which broad category you’d like to write your 8-12-page term paper on (due on August 1, well after the trip). Which course the student takes this as should determine the content and methodology of the student’s term paper. Where possible, it should also determine the student’s selection of a site paper and site report, and of the two Who’s Who oral reports. After their initial registration, students can change which course they are registered for, even while we are on the study tour, by informing Michael Taber. After all, sometimes one discovers on the study tour new directions for a final paper. Discovery is what study tours are all about.

In addition to the above, the study tour also satisfies St. Mary’s ELAW requirement (Experiencing the Liberal Arts in the World). Further, students who take the course at one of the above 300-level options get to count the four credits of the course toward the 44 upper-division (300- or 400-level) credits that are required of all St. Mary’s students, regardless of major.

Students from other institutions should contact Professor Taber to get information from him relevant to getting pre-approval from their home institutions for transfer upon completion.

Covid-19 and the study tour

Those interested should apply (see “Application” page), for prior to the first payment being due (February 15) the College’s Office of International Education will make a determination of whether study tours for the summer can proceed, in light of the then-current information and advice of the CDC and the U.S. Department of State.

Much of our activities will already be outdoors: our meals, our seminars, our site reports, our visits to archaeological sites. (And those beaches, of course, with the open-air cafes along the boardwalk.) We expect to have to be masked in museums, as well inside other places. And needless to say, vaccinated, of course.

Whether or not the study tour will go forth will depend on such matters as advice to U.S. travelers to Greece, and Greece’s own policy on admitted travelers from the U.S.

What if the study tour gets a green light in February (when the first payment is due) but has to be canceled later? Consult the refund policy on the “Costs” page.

For whom is this study tour right?

We’ve had students who went on to med school (we have some lessons on Ancient Greek medicine) and law school (some students have written their final paper on aspects of the Ancient Greek or Roman legal systems).

So for students, one’s major is not a consideration. And for others, nor is one’s life stage. What IS a consideration is interest in learning more about this part of the world in the context of a warm and welcoming group of fellow learners.

First, for those needing something of an overview of sights in Greece, here’s a 10-minute video by a travel writer–some guy named Cody. We’ll be going to some of his “top 8” places, and many other cool sites besides.

A study tour is not simply an off-campus course. Not only do we get to see sites, structures, and landscapes that directly relate to our readings, like those mentioned below, but we learn that our image of Greece must extend beyond silent, weather-worn limestone foundations and pages in literally inanimate books. Greece has lived in dozens of centuries, and is still very much alive.

Greece, like the rest of southern Europe, gets its summer wind prevailing from the south. This means from the Sahara, though cooled some by the Mediterranean. It is hot, with summer highs in the 80’s and 90’s, and in a heat spell, the 100’s. Summer rains are rare, and summer humidity a mere story (myth?) Greeks have heard about. Accordingly, Greeks take seriously the siesta time, which extends from about 1:00 to about 5:00 every afternoon. (The fact that precision is not possible here is part of the charm, and sometimes the frustration, of the land.) Hence, they start their days early, and extend them late. The Greeks consider anything eaten before 9:00 p.m. to be a pre-dinner appetizer.

Napping, however, is but one option for siesta. It is also good time for swimming at an area beach, for catching up on some reading or writing, for strolling to one of the occasional shops or cafes that does not close for siesta. However, this is a credit-bearing academic course. Those interested in three-plus weeks of Greek beaches, punctuated only by gift shopping and evenings in cafés, are advised that this study tour is not for them.

Our long-time Greek travel agents, the Cocconi family at Educational Tours and Cruises, have arranged for us to stay in some memorable inns and hotels, all with standard amenities. See our Itinerary page for more details.

The Greek economy had a shock in 2011, and this has, predictably, been worst for those who are least able to afford any of the cushioning that can soften the effects of any recession anywhere. (Witness the U.S. in 2008.) The Greek unemployment rate peaked at 28% in 2013, and has modestly improved since then—but is still around 18% as of 2019. They still have a ways to go, but their trend lines are going in the right direction.

One element of Greece’s economy the importance of which is agreed on by the likes of the governments of Greece and of Germany, as well as the IMF and the European Central Bank, is that tourism reliably constitutes 15% of Greece’s economy. And no party to the on-going economic negotiations wants to jeopardize that. In fact, tourism has been growing so much since 2015 that our travel agents have had difficulty finding hotels and charter buses to reserve for their study tours from U.S. universities.

Since 2011, I have led seven study tours to Greece (2012, 2014, 2015, 2016, 2017, 2018, 2019), and each time we have been warmly welcomed—if anything, even more warmly as their economic doldrums have dragged on. The Greeks are fond of Americans—and not just because of our money. They like our friendliness and lack of pretension. Plus, many of them have at least one family member who lives or has lived in the States.

More than for their economy, Greece was in the news in 2015 for being a popular transit point for refugees and migrants from Turkey, seeking jobs in places like Germany and Sweden. This stopped in 2016 when the European Union struck a deal with Turkey to shut down the illegal migration businesses along the Turkish coast. This is good news for lots of reasons.

Our itinerary for 2021 includes the islands of Naxos and Paros, which have not been sites of migrants landing. Nor are they as close to Turkey as the islands that have been involved..

The classical word agōn (in Greek, αγών) means “contest, struggle.” This is a powerful concept, for three of the major contributions of classical Greece—athletics, drama, speech-making in the law courts and political assemblies—are all examples of agōnoi. It is what ties together Medea vs. Jason, Agamemnon vs. Clytemnestra, Odysseus vs. those who would steal his wife and estate, Athens vs. Sparta, Socrates vs. just about everyone, St. Paul vs. those who hold to pagan practices, and all those foot-racers, wrestlers, and discus-throwers. Even more interesting, the agōn is nothing on which the Greeks had a monopoly; it famously has its counterparts elsewhere in the world, as in German (der Kampf) and in Arabic (jihad).

For this word, and the process named by it, to be so long-lived and so widespread, struggle must be multi-dimensional. In our readings and our travels, we will encounter a range of human struggle. We will read of struggles within families (the Oresteia), between warring states (Thucydides), between political dictates and religious principles (Antigone), between legal dictates and a moral mission (Socrates), between cultural realities and a religious mission (Paul), and between an individual’s life and aspirations (Marcus Aurelius). We will visit sites of struggle: a number of theaters and odeons, all four of the pan-Hellenic athletic sites, and the site of Athens’ budding democratic debates and trials.

The meaningfulness of agōn lies not, or at least not exclusively, in winning. The theme of this course, therefore, will not be “Look at all the ways to be a winner and be a loser!” Matters are more complex. Rather, the agōn challenges us to muster determination, to endure, and sometimes even to compromise. The range of these challenges will be the focus of this memorably situated course.