I loved the seminars in Ancient Corinth, reading Socrates at the site of his drinking the hemlock (so cool!), and all the time spent out in the sun exploring ruins and temples and museums. The Greece study tour is truly immersion-style learning at its finest… except you also happen to be immersed in the birthplace of democracy, in a culture renowned for its hospitality, and eating the most delicious food you’ve ever had in your life.
Really, the study tour is extraordinarily well-planned and executed, fantastically fun, and it truly makes the stories, history, and people of Greece alive in a way you wouldn’t have known unless you went. Positively one of my best experiences at St. Mary’s, hands down.  —  Jaclyn G., 2014 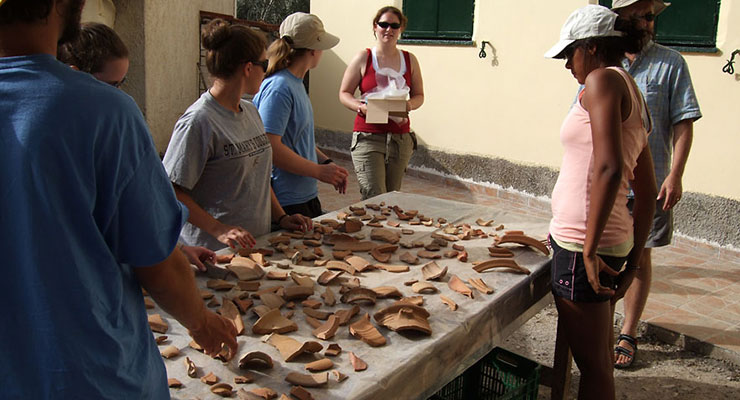 Grades for the course are based upon the following:

The final paper can have an archaeological, cultural, environmental, gender, historical, literary, philosophical, political, religious, or theatrical focus, but the topic must be discussed with the instructor prior to writing. The use of sources should be appropriate to the discipline for which you are registered for the course (English, History, etc.). A paper for History or for Philosophy, for example, must use (and not merely mention) primary sources.

Because work due in Greece is sequenced to our itinerary, such work submitted late will not be accepted and will receive a grade of zero.  For work due prior to departure (namely, the site paper) or after our return (namely, the final paper), late work loses one grade (10%), with an additional grade lost for each additional 24 hours of lateness.

When we’re in Greece, I’ll circulate a book with information about some 50 myths, from which each student will select a myth to tell creatively.

Grading criteria for creative retelling of a Greek or Roman myth:

For information on the site paper and site report, see here.

The Who’s Who exercise consists of each of you choosing two figures from these lists (preferably not from the same category), researching them, and then telling the rest of the group about each figure in 4-6 minutes while we’re in Greece. (No paper for this; just an oral report.)

Do not try to be encyclopedic about your figures, especially for those about whom much is known. Starting with a source like Wikipedia is fine. Starting and ending with it is not.

Your aim is to leave the group with an enhanced sense of the importance of your figures (especially as they are relevant to Greece), and to do this in a way other than by a bland reading of a dry list of disconnected facts. Your job is to bring these figures to life in a few minutes, by finding the story of someone’s life. Attend even to matters like intonation and body language.

Notes are allowed, but the greater one’s dependence on them, the less alive the figures become to the audience.

Grading criteria for the Site Report and the Who’s Who reports:

Here are examples of lists of possible Who’s Whos from recent years. For the list of this year’s, see here.