“Stress, depression, and effects of novel antidepressants on excitatory synapses” is funded by NIH (National Institutes of Health). The award will be used to hire SMCM summer research assistants over the next five years and to support the research itself.

In collaboration with Scott Thompson, of the University of Maryland, Baltimore, who will serve as principal investigator, Dr. Bailey will be examining the behavioral effects of a novel antidepressant drug.  Specifically, she will be looking to see if this novel antidepressant can restore normal behavioral responses across several different models of depression (i.e., does the drug work in different situations and on different behaviors).  Does it have a general effect? Additionally, she will be looking at behavioral side effects of the antidepressant including changes in sleep and awake activity patterns.

Congratulations to Dr. Scott Mirabile on his latest publications!

Read more about this research here.

Find out more about the award

Abstract
Executive functions consist of multiple high-level cognitive processes that drive rule generation and behavioral selection. An emergent property of these processes is the ability to adjust behavior in response to changes in one’s environment (i.e., behavioral flexibility). These processes are essential to normal human behavior, and may be disrupted in diverse neuropsychiatric conditions, including schizophrenia, alcoholism, depression, stroke, and Alzheimer’s disease. Understanding of the neurobiology of executive functions has been greatly advanced by the availability of animal tasks for assessing discrete components of behavioral flexibility, particularly strategy shifting and reversal learning. While several types of tasks have been developed, most are non-automated, labor intensive, and allow testing of only one animal at a time. The recent development of automated, operant-based tasks for assessing behavioral flexibility streamlines testing, standardizes stimulus presentation and data recording, and dramatically improves throughput. Here, we describe automated strategy shifting and reversal tasks, using operant chambers controlled by custom written software programs. Using these tasks, we have shown that the medial prefrontal cortex governs strategy shifting but not reversal learning in the rat, similar to the dissociation observed in humans. Moreover, animals with a neonatal hippocampal lesion, a neurodevelopmental model of schizophrenia, are selectively impaired on the strategy shifting task but not the reversal task. The strategy shifting task also allows the identification of separate types of performance errors, each of which is attributable to distinct neural substrates. The availability of these automated tasks, and the evidence supporting the dissociable contributions of separate prefrontal areas, makes them particularly well-suited assays for the investigation of basic neurobiological processes as well as drug discovery and screening in disease models.

Abstract
In two conditioned suppression experiments with a latent inhibition (LI) design, we measured the habituation of rats in preexposure, their LI during conditioning, and then extinction over days. In the first experiment, lick suppression, the preexposed group (PE) showed a significant initial unconditioned response (UR) to the target stimulus and significant long-term habituation (LTH) of that response over days. The significant difference between the PE and nonpreexposed (NPE) groups on the first conditioning trial was due solely to the difference in their URs to the conditioned stimulus (CS)—a habituated response (PE) and an unhabituated response (NPE). In the second experiment, bar-press suppression, little UR to the target stimulus was apparent during preexposure, and no detectable LTH. Thus, there was no difference between the PE and NPE groups on the first conditioning trial. Whether the UR to the CS confounds the interpretation of LI (Exp. 1) or not (Exp. 2) can only be known if the UR is measured. In both experiments, LI was observed in acquisition. Also in both experiments, rats that were preexposed and then conditioned to asymptote were significantly more resistant to extinction than were the rats not preexposed. This result contrasts with the consistently reported finding that preexposure either produces less resistance to extinction or has no effect on extinction. The effect of stimulus preexposure survived conditioning to asymptote and was reflected directly in extinction. These two experiments provide a cautionary procedural note for LI experiments and have shown an unexpected extinction effect that may provide new insights into the interpretation of LI.

The Edgar A. Doll Award of APA Division 33 (Intellectual and Developmental Disabilities) is a career award that honors an individual for his or her substantial contributions to the understanding of intellectual or developmental disabilities throughout their career.

Dr. Glidden will be giving an invited address at the APA convention this coming August. 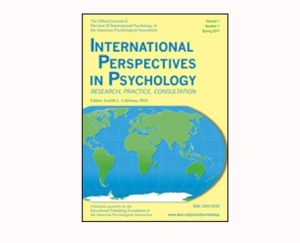 On April 17, 2014, Dr. Carolyn Tucker (University of Florida) presented on “A Culturally Sensitive Health Self-Empowerment Approach to Reducing Obesity in Culturally Diverse Communities” as part of the Psychology Lecture Series: Health and the Obesity “Crisis”.

If you are thinking about getting married, St. Mary’s College of Maryland Assistant Professor of Psychology  Renée Peltz Dennison would like to offer this advice: be very clear beforehand about what your expectations are for marriage.

In Dennison’s recent study, “The Role of Couple Discrepancies in Cognitive and Behavioral Egalitarianism in Marital Quality,” she and colleagues Brian Ogolsky and James Monk of the University of Illinois at Urbana‑Champaign surveyed over 200 newlyweds to find out how husbands’ and wives’ perceptions of gender roles affect marital satisfaction.

They found that an uneven division of household chores negatively affected wives’ marital satisfaction, especially when wives felt the roles should be more equal. “We found that, for wives, if there is a discrepancy between expectations and what’s actually playing out in the marriage, wives end up being significantly less satisfied in the marriage,” said Dennison. “For husbands, on the other hand, sharing household tasks doesn’t seem to be directly related to their marital satisfaction. It is possible that they do not perceive a discrepancy or that they buy into the idea that women should do the ‘second shift.’”

Talking about expectations early on can help put couples’ marriage on the right track, but follow through, Dennison advises, is key.  “Talk about whether you believe in traditional gender roles or more egalitarian gender roles, and then set up patterns that reflect your beliefs about marriage,” she said. “Often in the absence of actively working on making your day-to-day tasks match your egalitarian beliefs, things can slide back into more traditional gender roles.”

A majority of the newlyweds sampled were Maryland residents and recruited through county marriage records. Dennison said that undergraduate research assistants were critical in bringing the research to fruition.  “The students travelled to six different county court houses in Maryland to obtain marriage records,” Dennison noted. “They helped in recruiting participants, designing the online survey taken by the couples, and analyzing the data once the couples’ responses came in.” Dennison also noted that students are now helping with drafting manuscripts to submit for publication.

Dennison and her students have just finished collecting a second wave of data from the same Maryland couples. The goal, Dennison said, is to follow the couples over time to see how the things they reported in the first year of marriage affect outcomes in their later years of marriage.

Listen to Dr. Dennison’s podcast on why chore sharing can make or break a marriage. 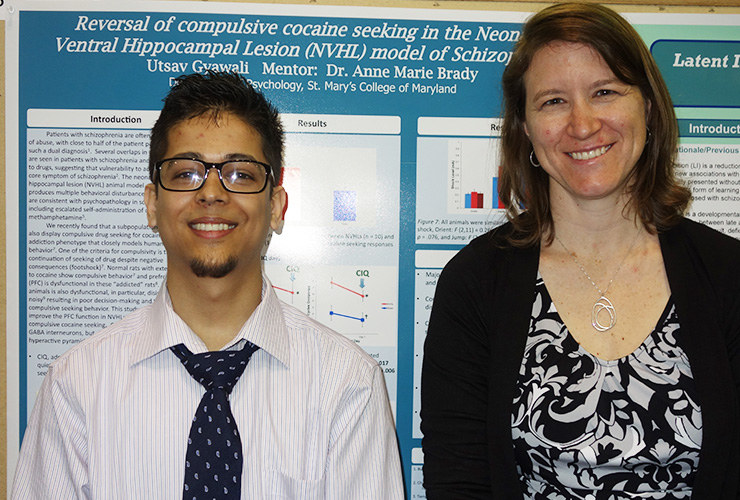 Utsav will present his findings at the annual meeting of the Society for Neuroscience in Washington, D.C. in November 2014. The grant also helped to cover some findings he presented at the 2013 SFN meeting. Utsav was active in research in the Behavioral Neuroscience lab in both his junior and senior years.