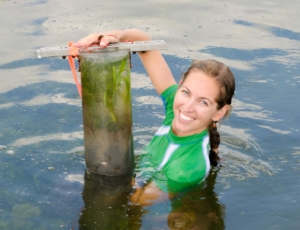 After decades of ambitious habitat restoration and species recovery attempts in the Chesapeake Bay, we are now seeing some signs of success including, most notably, the recovery of bay grasses, or “SAV”. Although populations of the native oyster—another iconic Chesapeake Bay species—are still at an all-time low, the Maryland oyster aquaculture industry is rapidly growing. SAV recovery and oyster aquaculture growth are both good-news stories because both are valued for their ability to provide habitat, process pollutants, and protect shorelines. Furthermore, aquaculture is an important source of income for thousands of Maryland residents.

The issue is that as these important living resources expand, they are increasingly coming into conflict because they both tend to occupy shallow water. Current regulations restrict aquaculture in areas that contain SAV under the assumption that aquaculture will impair SAV growth. This has created a burden for growers who are required to cease operations when SAV spreads into their lease area. However, it is unclear whether aquaculture actually harms SAV. Gurbisz and collaborators’ research aims to address this information gap by 1) analyzing existing spatial datasets to assess the extent of past conflict and predict where future conflicts are likely to arise and 2) conducting a field study to identify how aquaculture alters SAV habitat. The broad goal is to generate scientifically defensible information that can guide a reevaluation of policies that address SAV-aquaculture conflicts to maximize both continued SAV recovery and aquaculture expansion. SMCM student Victoria Lusk has already begun the spatial analysis, and Ellyse Sutliff and Lindsey Stevenson will help conduct the upcoming fieldwork. All three students are Environmental Studies majors.

Gurbisz is a coastal ecosystem ecologist who takes a holistic approach to studying the environment. Her research has been published in journals such as BioScience and Proceedings of the National Academy of Sciences, as well as recently featured in the Baltimore Sun.