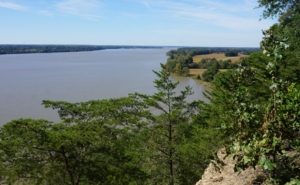 Professor of Anthropology Julia King took part in the pilot episode of “Tribal Truths,” a new podcast series from RadioIQ that aims to debunk myths and legends with facts, teaching about tribal cultures and current issues.

King says in the first episode titled  “Ancient cliffs are revealing lost tribal histories” that “there is so much that the land tries to tell us if we just listen to what it has to say.”

“[The archaeologists are] digging for traces of our towns and connecting them to our oral histories. And centuries after the Rappahannock Tribe’s removal from this area, they’re reconstructing our ties to Fones Cliffs, looking for three of our towns once located there. It’s a race against time, development and climate change,” Nelson said on the podcast.

The anthropology department at St. Mary’s College of Maryland first began studying the Rappahannock Tribe’s history in 2016 at the request of the National Park Service’s Chesapeake Bay Office, the Chesapeake Conservancy, and the Rappahannock Tribe. The work was undertaken to provide interpretive support for the Captain John Smith Chesapeake National Historic Trail. Following the NPS-funded project, the Tribe and King and her students have continued their collaboration. The survey of the greater river valley has been funded by the National Endowment for the Humanities, the U.S. Fish and Wildlife Service, and the National Park Service’s Underrepresented Communities Program.