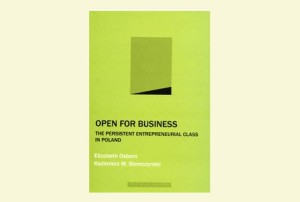 Open for Business: The Persistent Entrepreneurial Class in Poland

This book examines the entrepreneurial class in the post-communist Poland from a broad historical perspective, documenting the persistent endurance and the development of this class during radical social change from a controlled economy to a market economy. The authors situate this class in the context of general issues involved in the post-communist transformation, from the role of the communist elite in converting their political assets into economic resources, through processes of privatization and marketization of the economy, to the means by which business interests are represented in the political arena. These issues are connected in a way allowing to demonstrate how the entrepreneurial class in Poland took advantage of economic liberalization and, by doing so, it contributed to building a solid basis for a capitalist system. Although grounded in sociology, this book should be considered relevant to economics and political science as well. The authors hope that their research will cross the academic divide and reach politicians and journalists. Last but not least, the book should be of interest for business people in Poland and other countries. The authors examine the patterns of recruitment and formation processes of the entrepreneurial class using both quantitative and qualitative methods. Quantitative data consist of national surveys of the adult population in Poland conducted from 1978 to 1998, including work histories in which entrepreneurial activities are identified. In particular, the authors use three waves of the panel survey on social structure and mobility—conducted in 1988, 1993, and 1998—and two waves of the cross-sectional survey on social structure and psychological functioning—conducted in 1978 and 1992. Qualitative data come from intensive interviews pertaining to entrepreneurship, conducted in Poland in 1996, and 2001 to 2002. The authors conducted sixty interviews with entrepreneurs, two interviews with managers of private firms, and fifteen interviews with leaders of business organizations. Finally, the authors use data supplied by governmental agencies, business associations, consulting firms, and other organizations dealing with various aspects of small and medium-sized private enterprises. Appendices to the book provide detailed information about all empirical materials.

Elizabeth Osborn is a Professor of sociology at St. Mary’s College of Maryland. She received her Ph.D. in sociology from the Ohio State University. Her research on entrepreneurs in Poland began in 1991. She contributed to the two-volume series edited by Kazimierz M. Slomczynski, Social Patterns of Being Political (Warsaw: IFiS Publishers 2000), and Social Structure: Changes and Linkages (Warsaw: IFiS Publishers 2002), both based on the Polish Panel Study (POLPAN). This panel survey was conducted in Poland in 1987-1988, 1993, and 1998 and provided data pertaining to the social structure in the context of ongoing systemic transformation in the political, economic, and cultural domains. Osborn co-authored a paper on entrepreneurs in Poland (Polish Sociological Review, 1997) with Kazimierz M. Slomczynski, and she authored a paper on privatization in Poland, Hungary, and the Czech Republic (International Journal of Sociology, 1998). Her research interests center on comparative social change in East Central Europe. Her current work focuses on Poland’s integration into the European Union.

The book was reviewed in the following journals: